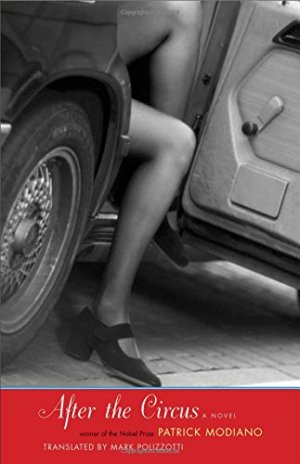 What a treat this book proved to be! Patrick Modiano’s After the Circus, set in the mid-1960s, is a hypnotic and atmospheric read — think moody Parisian cafes, high-ceilinged apartments, empty tree-lined streets and endless cigarette smoking — about a love affair between a teenage boy and an enigmatic older woman. But this is not just a love story; it’s also a kind of mystery, one that is marked by a dark and potentially violent undercurrent.

When the book opens we meet our narrator, Jean, who is looking back on his life. He tells us that as an 18-year-old he was interrogated by police about a man and a woman he claims not to know. It was during this interrogation that he first set eyes on the woman who has bewitched him ever since:

He [the policeman] saw me to the door of his office. In the hallway, on the leather bench, sat a girl of about twenty-two. “You’re next,” he said to the girl. She stood up. We exchanged glances. Through the door that he’d left ajar, I saw her sit down in the same chair that I’d occupied a moment earlier.

The girl’s name is Gisèle. Later that day, seated in the window of a cafe, Jean sees her passing by and catches her attention. She comes inside to join him, and the pair remain pretty much inseparable from the word go. But there are complications to their relationship. Jean, for instance, never reveals his true age; nor does he admit that his father has fled to Geneva under mysterious circumstances. And Gisèle, who was once married and worked in the circus, plays her cards close to her chest, never quite explaining how she makes a living and why she’s being booted out of her present accommodation.

As the narrative unfolds and the couple slowly begin to open up to one another, making plans to flee to Rome where Jean has been promised a job as a bookseller, Gisèle continues to hold things back. What, for instance, is she hiding? Why does she introduce Jean as her brother to her male friends? And who are these men  — and why do they want her and Jean to carry out a certain task for them?

A love letter to Paris

As well as the moody, evocative descriptions of Paris — the story feels a little like a love letter to the city — Modiano’s quietly understated prose, which is beautifully translated from the French by Mark Polizzotti, truly captures the exhilaration — and confusion — of young love. It brims with nostalgia, heartbreak and melancholy. Yet, at the same time, the book is deeply unsettling, for the young Jean is caught up in events much larger than himself, events he doesn’t fully understand and which have the potential to ruin his life and the lives of others.

I read this elegant, sophisticated book with my heart in my mouth, fearful not only for Jean’s well-being but also his reputation. It’s a wonderful read, the kind of novel you can get completely caught up in as it transports you to another time and place, helped in part by the lovely languid writing and the dreamlike recollection of a different era. Nothing, however, is straightforward: it poses more questions than it answers and there’s an emotional nuance to the writing that brings to mind the likes of Jean Rhys.

If After The Circus is any indication of Patrick Modiano’s general tone and style, chalk me up as a new fan.

Patrick Modiano was awarded the Nobel Prize for Literature in 2014. After The Circus was first published in French in 1992; this edition by Yale University Press’s Margellos World Republic of Letters series is due to be published in the UK later this month.

14 thoughts on “‘After the Circus’ by Patrick Modiano”