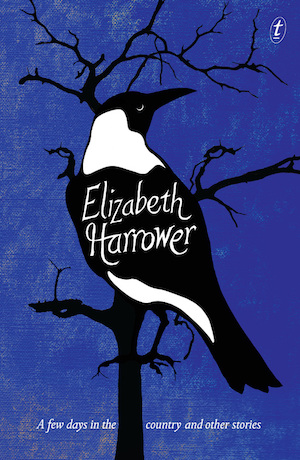 Elizabeth Harrower is an Australian writer whose work — four novels written between 1957 and 1966 — had fallen into obscurity until Text Classics republished her 1966 novel The Watch Tower in 2012. Text has since republished her three earlier novels — Down in the City, The Long Prospect, and The Catherine Wheel — as well as a fifth novel, In Certain Circles, penned in 1971, which Harrower had “withdrawn from publication”. (This went on to be nominated for almost every Australian literary award going and won the Voss Literary Prize in 2015.)

A Few Days in the Country and Other Stories, which was published in Australia last year and has just been long listed for the 2016 Stella Prize, is her first collection of short stories. There are 12 stories altogether. These include stories originally published in Australian journals in the 1960s and 1970s, a couple of unpublished ones from her archives, and one published for the first time last year in the New Yorker. (You can read that story in full here.)

The collection is billed as “essential reading for Harrower fans”, but given I’ve not read Harrower before I think it works just as well as an introduction to her work: having read this volume I’m now keen to explore her novels.

The stories, mostly about women trying to find their place in the world, whether leaving home for the first time or having lived more than half their lives in domestic servitude, are exquisitely written. The prose is polished and restrained and yet there is emotion — sadness, grief, excitement, vitality and vulnerability — on almost every page.

At times I was reminded of Harrower’s compatriot, Madeleine St John, and the great English writer Elizabeth Taylor, all of whom so expertly dissect morals, manners and human behaviour. But perhaps it’s also because all three writers explore a world, now outdated, in which women were subservient to men and expected to lead genteel, quiet lives. In many ways, Harrower’s stories are throwbacks to a different era.

This is exemplified in my favourite story in the collection — The Beautiful Climate — in which a man called Hector Shaw buys a decrepit holiday cottage on an island off the coast of Sydney and then forces his wife and 18-year-old daughter to help him do it up every weekend for the next two years:

As Mr Shaw had foretold, they were constantly occupied putting the house in order, but now and then he would buy some green prawns, collect the lines from the spare-bedroom cupboard, and take his family into the middle of the bay to fish. While he made it obligatory to assume that this was a treat, he performed every action with his customary air of silent, smouldering violence, as if to punish misdemeanours, alarming his wife and daughter greatly.

As time progresses, it becomes clear that Mr Shaw is a domestic tyrant who doesn’t even realise how his behaviour scares his loved ones. He breaks off a friendship with his neighbours because he doesn’t like the fact their son asked their daughter out on a date. And no sooner has the cottage been fixed up than he decides to sell it, depriving his wife and daughter from enjoying the fruits of their labour.

There are other “Mr Shaws” dotted throughout the collection — indeed, men don’t come off very well at all, though Harrower refrains from casting judgement on any of her characters. But, equally, some of the women in these stories aren’t particularly nice either, such as  the rich and snobbish Julia Holt, in Cornucopia, who ranks her friends into grades (Grade I friends are “notable people”, Grade II are “hoity-toity daughters of earthy butchers or pretty secretaries living in two-bedroomed bungalows”).

Trials of the heart also feature strongly — in The North Sea the first-person female narrator flees to rural Scotland to come to terms with her divorce; in A Few Days in the Country the depressed Sophie contemplates suicide, presumably because she’s been hurt in love — but Harrower’s stories are never mawkish or sentimental; they’re melancholy, and often sad, but there’s also a sense of hope, too…

A Few Days in the Country and Other Stories will be published in the UK on 31 March, and the US & Canada in April.