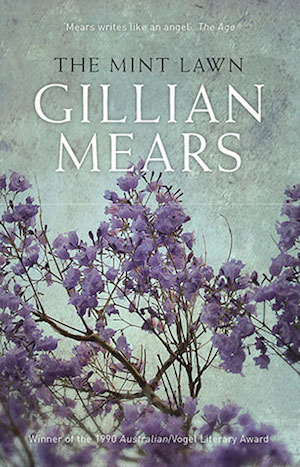 What is it that propels us to read an author’s work as soon as we hear of their deaths?

Not long after I discovered the sad news that Gillian Mears had died (she was just 51 years old and had been diagnosed with multiple sclerosis 17 years earlier), I extracted her debut novel, The Mint Lawn, from my pile of Australian books, where it had been languishing since 2011.

I remember the date because I acquired the book not long after I finished reading Mears’ award-winning Foal’s Bread, which was newly published at the time. That book was astonishing – written in beautiful, sometimes difficult, language, littered with intriguing leitmotifs, and filled with such emotion that it has lived on in my memory ever since.

I rather suspect that The Mint Lawn, first published in 1991, will also live on in my memory. It earned Mears the Australian/Vogel Literary Award, a prize given to an unpublished manuscript by a writer under the age of 35.

It’s quite an extraordinary debut novel — on all kinds of levels. It’s ambitious, creative, powerful, authentic. And it has the feel of having been written by someone who is mature beyond their years (Mears was just 26 when she wrote it). But it’s the story-telling, multi-generational and quintessentially rural Australian, that makes it such a rewarding read.

The Mint Lawn is essentially one woman’s tale — of her disappointing marriage to an older man, and her complicated but loving relationship with her mother, killed before her time in a car accident, over whom she is continuing to grieve.

Clementine is 25 and has never left the town on the northern NSW coast where she was born, raised and educated. She’s trapped in a marriage with quirky old Hugh, the man who was once her music teacher, and is desperate to escape — to live a more adventurous and passionate life — but something is holding her back, and she’s not quite sure what.

The story flits between Clementine’s increasingly desperate current situation (told in the first person) and her happy but complicated childhood growing up with her auctioneer father, social-climbing, party-loving mother and two horse-crazy sisters (told in the third person).

The latter storyline helps inform the former so that the reader comes to understand Clementine’s place in the family and the ways in which her outlook and attitudes have been shaped by her mother, a woman who tried to make small-town life much more exciting and glamorous than it really was.

It’s only when Clementine comes to terms with her past (and her reasons for staying in the town) that she finds the courage to follow a different path.

Admittedly, it took me quite a long time to read this book, not because I wasn’t enjoying it, but because I had a lot of other stuff going on. However, whenever I picked it up I was immediately transported into the topsy-turvy, sometimes funny, sometimes sad story of Clementine and her crazy but loving family.

It’s a truly immersive read, perhaps because it’s so richly detailed and multi-layered — nothing feels tacked on. You simply get thrown into the maelstrom of Clementine’s life, and because it’s mainly told from her perspective in a frank, forthright and sometimes crude manner (there’s quite a lot of graphic observations about sex and sexuality in this book, it has to be said) you get to share a rare intimacy with all the characters in this rather remarkable story.

In many ways it’s like a literary soap opera — there’s drama at every turn, but it’s not overdone, and even the landscape and the wide cast of subsidiary characters lend an authenticity that will be familiar to anyone who’s ever endured small-town life.

Unfortunately, The Mint Lawn has only been published in Australia. If you live elsewhere, do check bookfinder.com for second-hand copies, as it’s definitely worth tracking down — but be warned, it’s probably cheaper to buy a brand new edition directly from Oz.

13 thoughts on “‘The Mint Lawn’ by Gillian Mears”