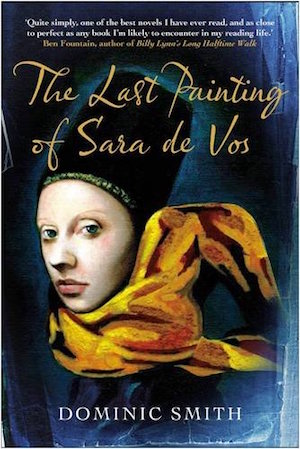 I quite like stories about art, and for whatever reason Australian authors seem to like writing them: think Peter Carey’s Theft: A Love Story, Alex Miller’s Autumn Laing and Patrick White’s The Vivisector.

Into this canon of art-themed novels comes Australian expat Dominic Smith’s The Last Painting of Sara de Vos, a rather exquisite tale revolving around a painting by a (fictional) 17th century Dutch painter, the first woman to ever become a member of the Guild of Saint Luke in Holland, joining the likes of Rembrandt and Vermeer. It spans three centuries, is set in three cities — New York, Amsterdam and Sydney — and begins as a crime story before morphing into a mystery-cum-thwarted-romance-cum-cat-and-mouse-suspense tale.

It’s a page turner of the finest order and has already attracted favourable publicity in the US, where Smith resides, including this excellent review in the New York Times. Meanwhile, in Australia, it has topped the independent bookseller’s list (in June) and garnered great reviews in the Sydney Morning Herald and The Australian. Blogger Lisa Hill has sung its praises too.

The book opens in rather dramatic style. It’s 1957, the setting is the Upper East Side of Manhattan. Wealthy patent attorney Marty de Groot and his wife are throwing an extravagant party in their three-storey penthouse to raise money for the city’s orphans, something they do every year.

During the party a crime is committed — although it takes them several months to realise. A painting from the Dutch Golden Age that has been in Marty’s family for more than three centuries — and which hangs over the marital bed like a bad omen — is stolen. A fake is put in its place.

The fake was unwittingly produced by a PhD art student, Ellie Shipley, an Australian now living in Brooklyn, who has reached an impasse in her dissertation on women painters of the Dutch Golden Age and spends most of her time doing art restoration work instead. (She had initially trained for a career in conservation at the Courtauld Institute in London but moved into art history when she realised the plum jobs would always “go to older, male graduates, to the men who sported cable-knit cardigans and Oxbridge accents”.)

As part of this line of work, she is often asked to authenticate and touch up old masterworks, so when she is commissioned by her usual contact to replicate At the Edge of the World, a rather sombre painting by a little known female artist, she is immediately taken by the project even if she is skeptical of the agenda behind it:

When he produced three high-resolution colour photographs of the painting in its frame she felt her breath catch — it was unlike anything else painted by a baroque woman. Here was a winter landscape with the glaucous atmosphere of an Avercamp, the delicate grays and blues and russets, the peasants skating through the ether of twilight above the ice, but with this stark and forlorn figure standing at the tree. She was the onlooker but also the focal point, the centre of gravity. This was no village frolic before the onrush of night — a common Avercamp motif — this was a moment of suspension, a girl trapped by the eternity of dusk. The girl had been lavished with very fine brushwork, the hem of her dress frayed by a hundred filaments of paint, each one half the width of a human hair. The painting’s atmosphere, even in the photographs, was incandescent, hushed. It somehow combined the devotional, religious light of a monastery portrait and the moodiness of an Italian allegory.

Ellie accepts the challenge of reproducing this painting with a kind of relish, but it’s a decision that haunts her for the rest of her life. It not only brings her into close contact with Marty, who woos her in an underhand way, hoping she’ll confess to the crime, but threatens to unravel her relatively controlled but lonely life — and, then, decades later puts her much-lauded career at risk.

A trio of storylines

This crime-based 1950s Manhattan storyline — in which Marty and Ellie eventually meet  — is intertwined with two others: that of Sara de Vos herself and the tragic circumstances leading up to her creating the painting in question; and a more contemporary narrative in which Ellie, now an internationally renowned art historian living in Sydney, fears she’s going to be exposed as a forger when both the original and the replica paintings arrive simultaneously at the Gallery of New South Wales for an exhibition she is staging — and Marty, now in his 80s, isn’t far behind.

These different narrative threads are told in alternate chapters, creating a complex, non-linear novel, but one which is highly entertaining.

The Last Painting of Sara de Vos works as a cohesive whole because there’s an underlying fear holding the story together: will Ellie’s crime be discovered? As she and Marty conduct a cat-and-mouse game spanning almost 50 years, the reader is constantly wondering whether Ellie’s past will finally catch up with her.  This build up of suspense is aided by the intermittent switches in pace when the author takes us back to 17th century Holland to tell us the tragic story of Sara de Vos who never achieved proper recognition for her talents during her lifetime because women painters were never taken seriously.

Aside from the expert storytelling at its heart, the novel is incredibly well researched: the forger’s techniques and how to authenticate centuries-old artwork is expertly told, giving the reader a fascinating glimpse into an otherwise foreign world: that of the art historian and conservator. Even Sara de Vos is based upon an amalgamation of various real-life Dutch Golden Age painters, including Sarah van Baalbergen, who gained entry to the Haarlem Guild of St Luke in 1631, the first woman to do so. Sadly, none of her work survives.

And the characters are great — all slightly damaged but good-hearted, the kind of people you care about or empathise with for various different reasons. There are parallels between Sara and Ellie, two women struggling to be taken seriously in the art world more than three centuries apart, which infuse their stories with the spirit of the underdog. And while Marty comes from a different world entirely — privileged, white and male — he’s sympathetically drawn, because he knows he’s never quite lived up to his potential.

All up, this is a wonderfully realised tale that marries a contemporary storyline with two historical ones. It shines a light both on the hidden world of art forgery and women’s unrecognised contributions to the Dutch Golden Age. And its mix of crime, suspense, romance and tragedy makes it a clever and compelling read. You may never look at an old master the same way again.

This is my 32nd book for #ReadingAustralia2016