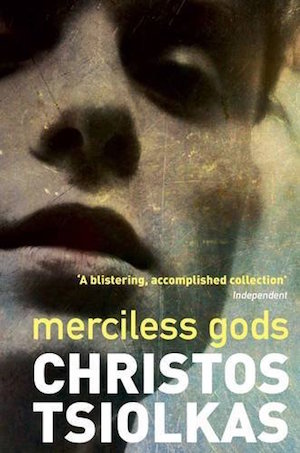 Christos Tsiolkas has a reputation as a bold writer of daring, often controversial, fiction. Merciless Gods, first published in Australia in 2014 but recently released in the UK, is a collection of short stories that continues Tsiolkas’ trademark flare for writing edgy stories about taboo subjects.

There are 15 stories in the collection — and they’re not for the faint hearted. Even those that are “tame” by Tsiolkas’ standards are still confronting and unsettling. There are tales about homophobia, racism, revenge, death, grief, power, parenthood, friendship and family. And most are set in the suburbs of Melbourne, Sydney and Perth.

The range and breadth of the collection is one of its great strengths, because each story has its own distinctive “voice”:  we hear from brothers, mothers, students, immigrants, young lovers, lost souls. Some are in the first person, others in the third person.

Many taboo subjects are addressed, from male rape to drug addiction, but while the writing is fearless — Tsiolksas doesn’t hold back on detail or imagery — it’s usually with a view to shining a light on injustice, bigotry and prejudice. In other words, these aren’t gratuitous tales; there’s a message at their core even if the reader might need to be shaken out of their own complacency to find them.

Tsiolkas is at his best concentrating on his “pet” subjects — what it is to be gay, the fraught and complicated relationships between generations, and cultural baggage that comes from being the child of an immigrant. But he also writes powerful stories about heterosexual couples and friendship — the opening story, Merciless Gods, for instance, is a horrifying glimpse of the competitive spirit between young adults and what happens when you take things too far (and is highly reminiscent of Wayne Macauley’s Demons).

When I write about short story collections I tend to highlight a handful of stand-out stories, but it’s hard to do that with this book because they’re all so good: there isn’t a weak link in the chain, so to speak. Of course, some are more hard-hitting and stomach churning than others.

I found the final story distasteful (I won’t name it here because it has a term in it that will generate lots of spam), but only because it presented an unfamiliar world of anonymous male sex (which, to be honest, I’d rather not know about), but it did make me think about the ways in which some people pick and choose when to follow their religion and how leading a less-than-honest life can be psychologically damaging.

I felt the same way about Genetic Material in which a man visits his father in a nursing home and then does something rather shocking, not because he wants to but because he feels that it’s the most kind thing he can do. But it made me shudder and want to take a long cold shower.

Even the less confronting stories are, well, still confronting. In Sticks, Stones a hard-working mother realises she hates her teenage son after she hears him call a girl in his class with Downs Syndrome something rather offensive. Instead of dealing with the situation and ticking her son off and explaining why his language is unacceptable, she chooses to humiliate him instead.

In Tourists, Trina and Bill, a young married couple visiting New York, have a falling out over a racist term that Bill mutters about a gallery attendant who annoys him. The tension between the pair — Trina’s anger and horror, Bill’s shame and confusion — are expertly captured in a story that clearly shows how the stress of travel can cause people to misbehave badly. This is made all the more ironic given the pair are trying not to look like obvious tourists — despite their distinctive accents and attire.

I’ll be the first to admit that Merciless Gods isn’t for everyone — the content is very much of the adult kind. But if you have read Tsiolkas’ work before, you will know what to expect.

And even if you haven’t, but you like your fiction to take you out of your comfort zone, to present viewpoints and stories that will make you think, unsettle you and leave you with a lingering sense of disquiet, it’s definitely one to add to the wishlist.

For another take on this collection, please see Simon Savidge’s review.

This is my 37th book for #ReadingAustralia2016