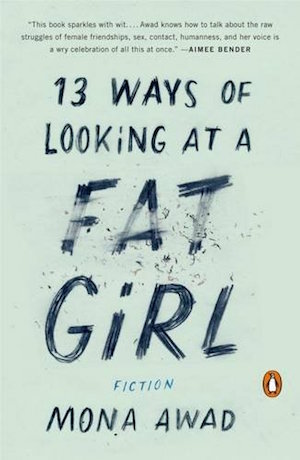 Earlier this year I read an extraordinary collection of essays called Small Acts of Disappearance by Australian writer Fiona Wright about her battle with an eating disorder. It was an illuminating (and exquisitely written) look at what it is like to be constantly at war with your body.

Mona Awad’s novel, 13 Ways of Looking at a Fat Girl — which has been shortlisted for the 2016 Giller Prize  — is cut from the same cloth. It mines a dark psychological seam of people who have an unhealthy relationship with food. It’s wry and funny, but also unsettling, for not only does Awad turn her sharp, perceptive eye towards the all-consuming issue of weight control, she also focuses on how this affects relationships between mothers and daughters, female friends, colleagues, sexual partners and the people we marry.

And as the title might suggest, the book has 13 chapters. I use the word “chapters” loosely, because each is essentially a self-contained short story, but read together they form a cohesive whole. To me it felt like a novel, rather than a short story collection, though the occasional shift in point-of-view, from the first person to the third person, and unexplained leaps in time are a little jarring.

13 Ways of Looking at a Fat Girl is largely told from Lizzie/Beth/Elizabeth’s point of view (her name changes in conjunction with her attempts at reinventing herself in line with her changing body shape). As a teen we learn that she is — well, how should we say this? — fat. Or, in any case, rather overweight. But she harbours what turns out to be a prescient desire:

Later on I’m going to be really fucking beautiful. I’m going to grow into that nose and develop an eating disorder. I’ll be hungry and angry all my life but I’ll also have a hell of a time.

Over the course of the next 200 or so pages, we follow her trajectory from chubby teen to a painfully thin woman whose weight loss has not made her happy: she’s hungry and angry all the time, as predicted, and her relationships, particularly with her husband, are strained.

The warning signs begin early, for even as a teenage girl it’s clear Elizabeth has body issues. She skips class because “there are stretches of days when I just can’t bring myself to leave my room, to be seen”.

Later, in her mid-20s, working a boring temp job, she’s dieting heavily. She’s lost weight, but it’s a constant battle of counting calories and watching everything she puts in her mouth. A co-worker with whom she goes to lunch accuses her of being a nit-picking eater, of being “salady”.

I think of the perfect comeback to the salady remark. I put us both back in the bakery and I make her say that I’m salady with clotted cream in each corner of her lips. But instead of replying, Am I? I lean in and in a low voice I say, Listen, you little skank! Not all of us can eat scones and have it turn into more taut littleness! Some of us are forced to eat spring mix in the half-dark of our low-ceilinged studio apartments and still expand inexplicably. Some of us expand at the mere contemplation of what you shovel so carelessly, so dancingly into your smug little mouth. And the way I say it, leaning in like that, with all this edge and darkness in my voice garnered from months of restraint, makes her bow her head in genuine remorse.

When we meet Elizabeth’s mother (in a rather hilarious chapter entitled “My Mother’s Idea of Sexy”), it’s easy to see how her body issues have arisen, for Elizabeth’s mother is beautiful and narcissistic, but she also has a strange relationship with food (“she’d had her jaw wired after giving birth to me. She did it to shed her baby weight”) and has weight issues of her own.

Her mother’s emphasis is always to look good, even if that means donning clothes that are hugely uncomfortable. So when Elizabeth tries on a dress that has a sweetheart neckline that keeps falling down, for instance, her mother pooh-poohs the idea of wearing a cardigan over the top to prevent any embarrassing wardrobe malfunctions. “That’ll ruin it,” says her mother “just keep your back straight and your arms close to your sides like this.”

Eventually, the only way that Elizabeth can maintain her now slender weight is to control every other aspect of her life revolving around food. She won’t eat out (except once a month when she goes on a binge then spends the next day feeling guilty), nor socialise knowing that high-calorific food might be present. Mealtimes at home are carefully managed so that she eats separately from her husband, who despairs of the constant salads and vegetable dishes and occasionally engages in acts of secret eating (he’ll go to a hamburger joint to indulge in fast food).

I hesitate to call 13 Ways of Looking at a Fat Girl a black comedy, though it’s surely black and there are some quite funny moments in it. But the story, told in a scathing, almost caustic tone throughout, has a downcast beat to it. Perhaps it might be better to call it a heartbreaking comedy?

To be honest, I wasn’t sure how I felt about this book when I came to the end, but it’s been more than a week since I finished it and certain scenes have stuck with me, which is a good sign. I’ve grown to like it more with the passing of time.

It’s a refreshingly candid look at the pressure women are under to maintain a particular weight and raises many important issues surrounding food, body shaming and health. Awad has created a deeply nuanced novel, one that will make you think differently about your own body the next time you look in the mirror or help you re-evaluate your own relationship with food.

This is my 1st book for the #ShadowGiller2016