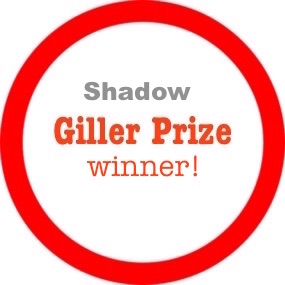 As most of you will know, I’ve spent the past eight weeks shadowing Canada’s prestigious Giller Prize literary award — along with Canadian journalist Alison Gzowski and Canadian blogger Naomi MacKinnon — as part of the Shadow Giller. That has meant reading and reviewing the six titles on the shortlist.

Yesterday we named our winner. To find out which book we thought was deserving of the prize, do visit KevinfromCanada’s blog, where we have been posting reviews fairly regularly during this process.

Tomorrow evening (Canadian time), the winner of the official Giller Prize will be announced. It will be interesting to see whether the official jury chooses the same book as the Shadow jury… stranger things have happened.

UPDATE — TUESDAY 8 NOVEMBER 2016:  Do Not Say We Have Nothing has been awarded this year’s Giller Prize. You can find out more via the official announcement on the Giller Prize website.