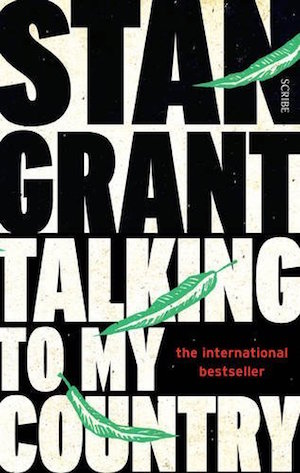 “What does it feel like to be an indigenous person in Australia?”

This is the question journalist Stan Grant wrestles with in a radio interview upon his return to Australia after a decade working overseas. It’s the same question he wrestles with in Talking to My Country, a heartfelt and deeply personal memoir about what it is to be an Aboriginal growing up in Australia.

I tell Richard [Glover, the interviewer] how vulnerable we can be. I tell him of the little boy I once was who felt so ashamed of his colour that he tried to scrub it off. I tell him of the ache of poverty and how my family had roamed the back roads looking for a home in a land we had lost. I tell him of how a sideways glance or a snickering child could steal our souls. I tell him how we learned to measure our words and lower our voices for fear of being howled down. I tell him that even now despite carving out a place for myself I could so easily be crushed by rejection.

But Talking to My Country is more than just a memoir. It’s also a frank examination of black and white relations, and Australia’s failure to reconcile its shared and troubled history. If, as Grant argues, Australia is a “great country”, it should also step up to the mark and be “held to great account”. He has a point.

Here are some of the sobering facts peppered throughout Stan’s frank and eye-opening narrative:

But while Grant paints a shameful portrait of a nation divided, he is quick to point out that he is one of the lucky ones. He left school early, but he managed to find a route out of poverty through further education and journalism.

Many of you may know him as a broadcast journalist — he was a correspondent for CNN for a decade covering all kinds of conflicts in Iraq, Afghanistan and North Korea, but I mainly remember him as the host of the current affairs program Real Life in the mid-1990s. He was the first Aboriginal journalist to be on mainstream TV.

I’m not sure his book offers any solutions to Australia’s troubled past, but what it does do is show how we got into this mess. Grant does not point the finger at white people per se, but at the “system built on white privilege”. He shows that it is only by understanding our past — the shared history, the massacres, the unjust treatment of his people — that we can reconcile what has happened and move into the future together as one united people. Grant states that Aboriginals are constantly told to let it go, but he says it’s not quite as easy as that:

… our history is a living thing. It is physical. it is nose and mouths and faces. It is written on our bodies. […] It is there in the mental scars you often cannot see.

It doesn’t help that Grant, having grown up in the margins of society, still feels a stranger in his own country. “When an anthem is played and a flag is raised we are reminded that our country is no longer ours,” he writes.

I came away from this book feeling an overwhelming sense of sadness — and shame. It’s the exact same reaction I had when I read Kim Scott’s confronting novel Benang: Straight from the Heart, about a man who realises he is “the product of a long and considered process” to create a white man from a long line of people with Aboriginal blood.

Talking to My Country is eye-opening and informative. It’s fuelled by anger and shame. I read it feeling my heart breaking with every turn of the page. It’s exactly the kind of book that every Australian should read, but it has wider appeal in showing what happens to people when they are treated differently because of the colour of their skin. In the current political climate, its message seems more important than ever.

This is my 46th book for #ReadingAustralia2016.

10 thoughts on “‘Talking to My Country’ by Stan Grant”