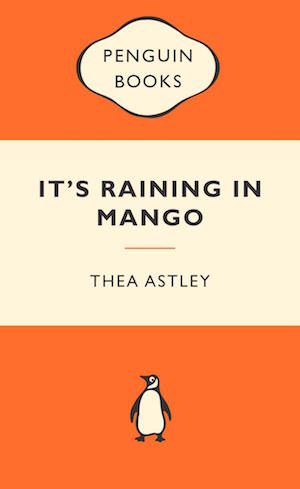 Reviews of Thea Astley’s novels on this blog are like buses: none for ages, then two come along at once.

First published in 1987, It’s Raining in Mango was Astley’s 10th novel. It tells the story of five generations of one family — from the 1860s to the 1980s — and touches on a wide variety of issues, including racism, sexism and homosexuality, all within a distinctly colonial Australia framework.

As ever, with most of Astley’s novels, it does not make for easy reading, but it will reward those who persevere through at least the first 60 or so pages.

The book’s unusual structure makes it a challenge to read. Instead of telling the story in chronological order, Astley complicates matters by constantly jumping between generations and sometimes letting time frames overlap. This does not make for a straightforward read and requires some effort on behalf of the reader to make things “work”.

Fortunately, there’s a helpful dramatis personæ at the front of the book, which provides the birth and death dates of each character, including the circumstances of their death. Without this I’m afraid I would have been totally lost.

The structure is also more akin to a collection of short stories (it won the inaugural Steele Rudd Award, a literary prize for short stories, even though it’s not branded as such) rather than a novel (a trait shared with her 14th novel Drylands), but the interconnections between characters means that it feels like a cohesive whole.

Reporting on dispossession and slaughter

When the book opens we meet an Irish-born journalist, Cornelius Laffey, who leaves Sydney, dragging his family with him, to set up a newspaper in the goldfields of northern Queensland in 1861. While there he witnesses the violence toward Aboriginals, who are dispossessed of their land and, finding much empathy with their situation, reports on it:

“No attempt is made to understand the feelings or even the natural rights of the indigenous peoples along these rivers. Their fishing grounds have been disturbed. Their hunting areas are invaded. All along the Palmer and the subsidiary creeks they have been pushed off by an army of diggers cradling for gold.[…] For every digger speared or killed along the mudsoaked track to the Palmer, there would be ten or more natives butchered. Many of the butchered are women and children. Blacks are now being shot on sight as if they were some pernicious vermin, and the outraged righteousness of one of our sub-inspectors of police has given sanction to the indiscriminate slaughter of these dispossessed people.”

This brutal, honest reporting results in him losing his job — and so sets into motion the cycle of incredible ups and downs for the Laffey family over the next 120 years.

During the course of this “novel” (I use the term loosely) we meet a wide variety of characters, most of whom are struggling to keep their heads above water, including Cornelius’ wife, who runs a pub, their son and daughter George and Nadine, and their respective partners.

Their individual stories, told in separate chapters, are gritty, often heartbreaking and sometimes violent. Nadine, for instance, has a child out of wedlock when she is 14 and ends up working in a brothel to support herself.

It’s Raining in Mango — the title refers to an imaginary town called Mango in tropical Far North Queensland — also covers the history of an Aboriginal family, whose lives occasionally intersect with the Laffeys. This serves to remind the reader that while things may never be smooth sailing for the Laffeys, things are a lot worse for the Mumblers who have suffered violent dispossession at the hands of white settlers.

What emerges is a portrait of Australia’s hidden history:  of strangers in a strange land trying to make a go of it, and its native inhabitants being massacred in the name of colonial “progress”.

For a much more intellectual — and insightful — take on It’s Raining in Mango, please see this article in the Australian Book Review.

8 thoughts on “‘It’s Raining in Mango’ by Thea Astley”