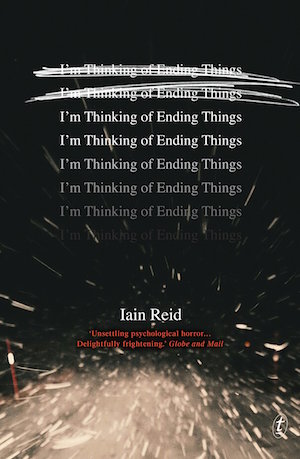 Earlier this week, about 40 pages into this debut novel by Canadian Iain Reid, I had to put it aside. It was creeping me out and I was home alone. I was worried I wouldn’t be able to sleep if I kept reading.

That’s the kind of effect I’m Thinking of Ending Things had on me. Normally, when it comes to reading, not much scares or frightens me. But there was something about this story that got under the skin and made me feel deeply unnerved.

When I picked it up again several days later — during daylight hours, I hasten to add — I felt the same unease. The tension, the palpable fear and the suspense continued to build. And then, as abruptly as it started, it fizzled out. The ending — oh, the ending — was a serious disappointment. I wanted to throw the book across the room!

The story is narrated by a young woman who has a relatively new boyfriend called Jake, but she’s not convinced their relationship is worth hanging onto and she’s thinking about ending it (hence the title).

This thought doesn’t really hit her until the pair go on a road trip to visit his parents who live on a remote farm. It’s a long drive, much of it taken in the dark while a snowstorm blows in, and there’s a lot of thinking time.

When the pair arrive at their destination there’s no immediate welcome party. Instead, Jake wants to show her around the farm, to see the sheep in the barn, the pigs in their sty, and to get a sense of the isolation. It’s cold and dark. There doesn’t seem to be any activity going on in the house. Is she ever going to meet the parents?

We walk around behind the house, my chin pressed down against my chest for warmth. We’re off the path now and are making our own way in the unshovelled snow. I don’t normally feel so hungry. I’m famished. I look up and see someone in the house, in the upstairs window. A gaunt figure, standing, looking down at us. A woman with long straight hair. The tip of my nose is frozen.
“Is that your mom?” I wave. No response.
“She probably can’t see you. Too dark out here.”
She stays at the window as we keep walking, plodding through the ankle-deep snow.

Going into further detail means I’ll give away crucial plot spoilers, so I’ll refrain. But let’s just say the tension mounts and there’s a deep feeling of unease. I kept turning the pages waiting for something horrific to happen. I had the feeling that my heart would leap into my mouth at any minute. I just did not know where the story was going, but I did know it wasn’t going to end well for the narrator.

That feeling was exacerbated by the one-page excerpts between chapters that indicate something very bad has happened. These excerpts take the form of an ongoing conversation between two people, but we don’t know who they are or who they’re talking about.

And at precisely that moment you think you know what’s going on, the author turns things on their heads and delivers a twist that — judging by the polarised reviews — you either love or hate. I fell into the latter camp.

And yet, despite the terrible ending,  I’m Thinking of Ending Things is a masterpiece in delivering atmosphere and suspense. Even though it’s written in a stilted style (very much in the vein of the Japanese crime fiction I love so much), it manages to play with the reader’s own fears, so that when the narrator sees two dead sheep on the farm, for instance, you immediately think it’s a foreshadowing of future events.

Perhaps it’s the kind of book that would benefit from two readings — if only to figure out how the “twist” works — but I came away from it feeling slightly cheated. I don’t expect neat resolutions in all that I read, but when you put yourself through 170 pages of tension-filled prose, it would be nice if the last 30 pages didn’t fall so flat.

If you want a psychological horror story that really pays off, I’d recommend reading Kenneth Cook’s Fear is the Rider instead. Or Michel Faber’s Under the Skin for properly rewarding spine-tingling chills.