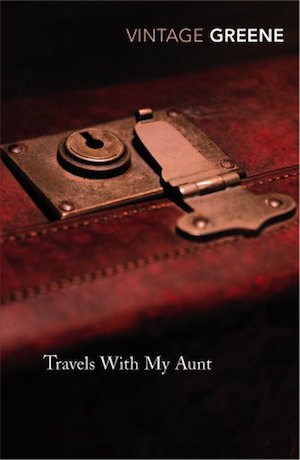 First published in 1969, Travels With My Aunt was one of Graham Greene’s later novels. It’s an unusually cheery one for a writer whom I mostly associate with dark, often moralistic, stories with strong Catholic overtones.

A cheery tale with dark undertones

Travels With My Aunt tells the story of a retired bank manager, Henry Pulling, whose dull suburban life is forever changed by his elderly Aunt Augusta, who convinces him to come travelling with her. A riotous romp across Europe and later South America ensues, but as the story progresses the belly laughs and hilarious moments give way to increasingly darker undertones.

At its core, the book poses an intriguing question: what is it to lead a good life? Is excitement and adventure better than leading a quiet, settled existence? And to what extent should we broaden our horizons — or toe the line? Is it ever okay to flout the law? Or hook up with a Nazi war criminal?

When the book opens we meet the first person narrator, Henry Pulling:

I have never married, I have always lived quietly, and, apart from my interest in dahlias, I have no hobby. For those reasons I found myself agreeably excited by my mother’s funeral.

At that funeral he meets his aunt — his mother’s younger sister — for the first time since he was a young child and she takes him back to her apartment, above a pub, where she resides with her lover, a middle-aged black man from Sierra Leone.

It soon becomes clear to the reader — and NOT to the narrator — that Aunt Augusta is more closely related to Henry than he may realise. “You were your father’s child,” she tells him on the taxi ride from the funeral to her home. “Not your mother’s.”

This sets the tone for much of the story: Aunt Augusta says outrageous things and tells outrageous tales, but there’s always a grain of truth in them, yet Henry is too naive, too unworldly to understand the full implications.

A different way of living

As the narrative progresses, Henry’s eyes are opened to a different way of living — his loveless existence is juxtaposed against his aunt’s often passionate past.

“Think how complicated my life would be if I had kept in touch with the men I have known intimately. Some died, some I left, a few have left me. If they were all with me now we would have to take over a whole wing of the Royal Albion.”

And he soon begins to see that his aunt has little respect for the law — she’s always dabbling in some money-making scam or trying to find ways to avoid having her bags checked at the airport:

As ever with Graham Greene, the writing has an assured elegance and the storytelling is confident, almost muscular. There’s the very real feeling that the author is having fun with the story, he’s enjoying creating these two characters that are polar opposites — the wayward, amoral aunt and her dull, colourless, jobsworth of a nephew — and throwing them together to see what might ensue.

The one-liners — which come thick and fast, especially in the earlier part of the novel — are hilarious. And many of the set pieces, including the police investigation into Henry’s mother’s ashes, which have been replaced by pot, had me tittering away as I furiously kept turning the pages.

Travels With My Aunt is one of those rare books that you can read for enjoyment alone; you can skim through the pages and forget the real world outside. But dig a little deeper and there’s a whole lot more happening underneath. Greene turns his perceptive eye to  bigotry, drugs, sex, marriage, religion and death. He throws in a smattering of espionage, a little bit of Nazi war crime, a small dose of youth culture (albeit Sixties style), and pits a naive middle-aged man against a worldly-wise 76-year-old woman and somehow creates a kind of magic.

I rather adored this novel. It’s not perfect by any stretch of the imagination — the middle part dragged a little for me — but the rather brilliant (and somewhat shocking) denouement suggests that Henry’s not quite so innocent after all…

I actually chose this book for my book group and I’m happy to report everyone else seemed to enjoy it as much as I did. We gave it a collective score of 7.5 out of 10.

10 thoughts on “‘Travels With My Aunt’ by Graham Greene”