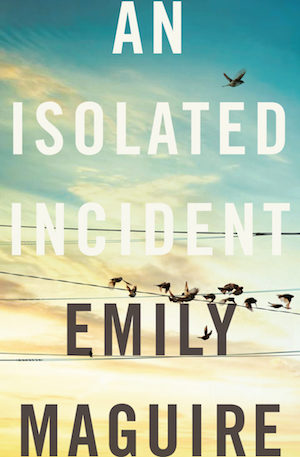 An Isolated Incident by Emily Maguire is one of those novels that refuses to be boxed into a single category. It dances a fine line between crime thriller and literary fiction. Its focus is not on finding out who committed a horrendous murder in a small town but on the outfall on the victim’s family and local community. It’s this level of social commentary — think Norwegian crime queen Karin Fossum — that lends the novel a literary quality.

Murder in a small town

The story is set in the fictional country town of Strathdee, in the NSW Riverina, on the road between Sydney and Melbourne.

In this typical close-knit, largely working class community, 25-year-old Bella Michaels disappears one April afternoon after finishing her shift at the local nursing home. Her body is later found at a roadside picnic spot.

Her much older half-sister, Chris Rogers, is called to identify the body, and from there the story splits into two interleaved narratives: the slow unravelling of Chris’s mental state as she seeks answers for Bella’s murder, and the journalistic investigation by May Norman, a young crime reporter from Sydney intent on breaking a career-defining story.

Chris, who is a barmaid and occasionally brings people back to her home for paid sex, tells her side of the story in the first person. Her voice is immediate, unflinchingly honest and distinctly working class:

You know, I’ve often been told I’m too trusting, too generous, too open. I used to think these were compliments, but recently I’ve come to realise that they are not. They say ‘trusting’ and mean ‘stupid’, ‘generous’ and mean ‘easy’, ‘open’ and mean ‘shameless’. All of those things are true and not true. It depends on who you ask, doesn’t it? Ask old Bert at the pub if I’m easy or generous or any of that and he’ll say no. He’ll say, ‘The little bitch slaps my hand if it so much as brushes against her’. Ask my ex, Nate. He’ll tell you a different side.
Look, what I’m saying is that sometimes I am trusting and generous and open and stupid and easy and shameless. What I’m saying is, who isn’t?

Meanwhile, May’s narrative thread is told in the third person and includes all the stories she files for an online news site, giving the novel an authentic, too-close-to-the-bone feel, almost as if Bella’s murder was lifted from real headlines.

What results is a fascinating portrait of two troubled women — Chris is still grappling with the break-up of her marriage to a man with a criminal past; May is reeling from her married lover calling off their affair and falls into her past bulimic behaviour —  in a town caught up by the media’s fear mongering and perplexed by the murder of an innocent woman who deserved better.

What makes this book so effective is the spotlight Maguire shines on misogyny and every day violence against women without being too prescriptive or obvious. Bella’s murder might be the isolated incident of the title, but the thoughtful reader will soon understand that her death is just one in millions of similar incidents across Australia (and, indeed, the world) in which women are victims at the hands of men, many of whom they know personally.

Maguire’s examination of the media’s obsession with pretty young women who suffer violent deaths and the sometimes morally dubious practises of crime reporters  is also deftly handed. Maguire even raises an interesting issue about the ethics of well-meaning groups and activists who use murder cases to promote their own causes without seeking permission from the victim’s family first.

But from my own experience as a journalist, I found May’s news stories false, in need of some strong sub-editing and there was at least one that raised my libel hackles. Don’t let that put you off, though; poorly written journalistic stories in fiction are a pet bugbear of mine. I suspect many readers won’t even notice these minor failings.

The ending, too, is weak; not because it doesn’t tie up all the loose threads, but because it feels slightly rushed and not altogether believable. But on the whole, this is an excellent, deeply unsettling read that explores sex, marriage, prostitution, masculinity, criminality and violence. The strong undercurrent of a troubled society, in which innocent men fail to call out their mate’s misogynistic behaviour, seems timely, calling to mind last year’s Stella Prize winner, Charlotte Wood’s The Natural Way of Things. It deserves a wide audience.

Longlisted for the 2017 Indie Book Awards, commended for Victorian Premier’s Literary Award for Fiction 2017 and shortlisted for the 2017 Stella Prize, An Isolated Incident is currently only available in Australia. I ordered mine from Readings.com.au, which charges a flat — and affordable — rate for shipping to the UK.

For other reviews of this book, please see Lisa’s at ANZLitLovers and Kate’s at booksaremyfavouriteand best.

The winner of the 2017 Stella Prize will be announced tomorrow (Tuesday 18 April). I’ve read all but one of the books; you can see my reviews here.

13 thoughts on “‘An Isolated Incident’ by Emily Maguire”