Set in post-war London, it tells the story of Mildred Lathbury, unmarried and in her early 30s, who is an “excellent woman” — dependable, reliable and the type of person who puts others before herself. She’s capable and independent, having had to look after herself following the death of her parents, and now her life in a dreary Pimlico flat consists primarily of her voluntary work helping gentlewomen who have fallen on bad times, running jumble sales and going to church.

But Miss Lathbury’s quiet and settled life is thrown into turmoil when new neighbours, the Napiers, move in downstairs.  Helena is an anthropologist; Rockingham is a lieutenant in the Navy. She’s having an affair with a colleague, Everard Bone; he’s a handsome, debonair ladies’ man who has spent 18 months in Italy charming a succession of Wrens.

When the Napiers befriend Miss Lathbury her first reaction is to remain aloof; she doesn’t want the hassle of making small talk with people she bumps into on the stairs. But eventually she thaws toward them, is drawn into their rather busy lives and is thrust into a new social circle outside of her normal Christian one.

This brings with it various complications, but it also adds a frisson of excitement, for when Rockingham pays her attention it’s hard to know what his real intentions are. Then there’s Everard, who’s fallen out with Helena, and may well be casting a roving eye in Miss Lathbury’s direction, while her friend, the vicar, seems to be falling for his new lodger — the glamorous widow Allegra, who doesn’t seem to be as lovely as everyone thinks. Where will it all end?

The best way to describe Excellent Women is to say it’s a gentle comedy. It also has a dash of romance, a smidgen of scandal and a little bit of intrigue. This all adds up to a rather poignant and, at times, rather refreshing read, for in this tale of a spinster with no real desire to marry we find a heroine who remains true to herself while having her eyes opened to other ways of living.

Miss Lathbury doesn’t suffer fools — and most of the men in her life are exactly that. As the novel progresses, she increasingly becomes weighed down by the realisation that society expects her to behave in a certain way; that she’s burdened by being single. And yet, as she becomes immersed in the lives of the men in her social circle, she begins to long for something else, some greater meaning, even if she’s not quite sure what form that should take.

You can’t help but wonder whether she hankers for her previous life where “fighting over a little matter like wearing hats in chapel” was the most she had to contend with: 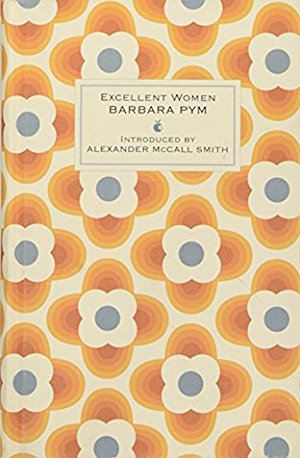 As much as I enjoyed this simple story of a woman caught up in other people’s messy lives, I also enjoyed the period setting. This is post-war London where the city is dotted with bomb sites (one half of the church Miss Lathbury worships at is in ruins), rationing is still in place, religion offers a sense of community and purpose to people’s lives (the rivalry between High Church and Roman Catholics provides some of the more comic moments in this novel), everyone’s obsessed with class and pecking orders, and there’s nothing a good cup of tea won’t sort.

Perhaps there can be too much making of cups of tea, I thought, as I watched Miss Statham filling the heavy teapot. Did we really need a cup of tea? I even said as much to Miss Statham and she looked at me with a hurt, almost angry look, ‘Do we need tea?’ she echoed. ‘But Miss Lathbury…’ She sounded puzzled and distressed and I began to realise that my question had struck at something deep and fundamental. It was the kind of question that starts a landslide in the mind. I mumbled something about making a joke and that of course one needed tea always, at every hour of the day or night.

Excellent Women is listed in Peter Boxall’s 1001 Books You Must Read Before You Die, where it is described as an “exquisitely crafted work” full of “poignancy and comedy”. I concur.

Thanks to Claire from my book group for choosing this book to read. It was rather delightful and as thought-provoking as it was charming. Recommendations for other Pym novels to try are warmly welcomed in the comment box below!