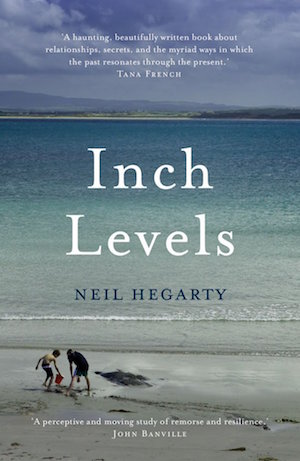 Set in the Irish borders at the times of The Troubles, Neil Hegarty’s Inch Levels is a rich and complex novel about family, community and the secrets we keep.

Patrick Jackson is a history teacher in his 30s who has been diagnosed with cancer. He’s lying in a hospital bed looking back on his life. He knows he hasn’t got much time left, so doesn’t feel encumbered by the need to say the right thing. He has a combative relationship with the nurses who patronise him, for instance, and he’s not entirely civil to his mother, the coolly unemotional Sarah, whom he has struggled to understand his whole life. And he makes it entirely clear he does not want to see his brother-in-law Robert, whom he detests, although his sister, Margaret, is welcome.

From Patrick’s behaviour we slowly come to learn of the complex relationships within this small Northern Irish family, of the unexpressed sorrow that has plagued his mother and of the secret domestic abuse that his sister has endured during her marriage.

But there are fond memories too: of swimming at Inch Levels, a local beach, of childhood picnics, and of the kind-hearted but simple-minded Cassie, an orphan who entered his mother’s family long ago and is now a cherished  family member in her own right.

The story is framed around external impacts on the family. First, there is violence in the form of the Second World War and later the Troubles, which erodes normality and leaves a lasting impact. Sarah’s first boyfriend, an American soldier, dies when a sea mine explodes off the coast of Donegal in 1943; almost 30 years later Patrick and Margaret get caught up in the events of Bloody Sunday.

And then there is the murder of an eight-year-old local girl, Christine Casey, whose body is found dumped at the edge of the lake at Inch Levels. A month later Christine’s mother kills herself. This local tragedy plagues Neil, who cannot comprehend how such a thing could happen.

All these events are intertwined in Patrick’s memory as he tries to make sense of his life so far. Just as Mike McCormack’s Solar Bones examines how the accumulation of little acts over time creates a whole life, Inch Levels looks at the impact of larger events on people’s personal circumstances. Eventually all the loose threads are tied together to deliver a powerful and redemptive conclusion.

But this is not an easy read. It’s a slow burner (it took me two goes to get into) and the narrative unfolds in a gentle, understated manner. There is no big drama here — despite the bombs, despite the family tragedies and despite the deaths.

It’s written in an eloquent voice, with gorgeous descriptions of the passing seasons, the landscape and the world beyond Patrick’s hospital window.

And there’s something rather insightful about the author’s ability to capture emotions and tensions between family members without turning the whole story into a melodrama. At times it very much reminded me of Deirdre Madden’s extraordinarily good One by One in the Darkness, which is set in a similar part of the world at a similar time.

For other takes on Inch Levels, please see Susan’s review at A Life in Books and Eric’s at Lonesome Reader.

This is my 5th and final book for the 2017 Kerry Group Novel of the Year Award.