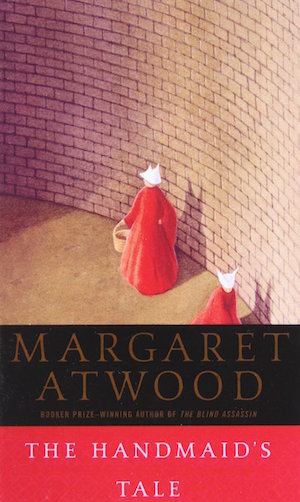 We are two-legged wombs, that’s all: sacred vessels, ambulatory chalices.

First published in 1986, Margaret Atwood’s The Handmaid’s Tale is going through a revival right now thanks mainly to the Hulu TV production, which screened in the US earlier this year and is currently being shown on Channel 4 here in the UK.

My edition, by Anchor Books, has been sitting on my shelf unread ever since picking it up in a charity shop more than a decade ago. I decided it would be a good idea to read it before I started watching the 10-part TV series, so I packed it in my suitcase on a recent trip to the Greek island of Rhodes and devoured it one (unseasonably) rainy day.

What’s left to say about this classic that hasn’t already been said? Most of you will know it’s a dystopian novel where women are seen solely as reproductive chattels, that they live in a strictly organised patriarchal society, but are governed by other women, known as Aunts, and that they have no rights: they cannot earn money, wear make-up, listen to music or read books.

And you will also know that women must wear a strict uniform influenced by old school Roman Catholic nuns, puritanical Christians and Islamic abayas. And that the handmaids are assigned to Commanders, wealthy men who are married to infertile women, for the sole purpose of bearing them children.

But in case you haven’t read the book, nor seen the TV series, let me elaborate further.

The story is narrated in the first person by Offred (not her real name) in a dry, almost clinical manner:

I am thirty-three years old. I have brown hair. I stand five seven without shoes. I have trouble remembering what I used to look like. I have viable ovaries. I have one more chance.

There’s a bittersweet pathos to her voice because she’s old enough to remember a time before these misogynistic laws came in and how things got so horribly turned on their head in what seems like the blink of an eye.

It was after the catastrophe, when they shot the president and machine-gunned the Congress and the army declared a state of emergency. They blamed it on Islamic fanatics, at the time.
Keep calm, they said on television. Everything is under control.
I was stunned. Everyone was, I know that. It was hard to believe. The entire government, gone like that. How did they get in, how did it happen?
That’s when they suspended the Constitution. They said it would be temporary. There wasn’t even any rioting in the streets. People stayed home at night, watching television, looking for some direction. There wasn’t even an enemy you could put your finger on.
Look out, said Moira to me, over the phone. Here it comes.
Here what comes? I said.
You wait, she said. They’ve been building up to this. It’s you and me up against the wall, baby. She was quoting an expression of my mother’s, but she wasn’t intending to be funny.

Laws are brought in overnight which forbid women from working, holding a bank account, owning property or being gay. Their lives are now restricted to the merest of functions, but the book posits an interesting theory: that taking away women’s freedom has created a safer, more comfortable, world for them:

We’ve given them [women] more than we’ve taken away, said the Commander. Think of the trouble they had before. Don’t you remember the singles’ bars, the indignity of high school blind dates? The meat market. Don’t you remember the terrible gap between the ones who could get a man easily and the one’s who couldn’t? Some of them were desperate, they starved themselves thin or pumped their breasts full of silicone, had their noses cut off. Think of the human misery.

I won’t elaborate further on the plot, but let’s just say the book makes for uncomfortable reading (the TV series, or the few episodes that I have viewed so far, are even more uncomfortable), but it’s an impressive, thought-provoking story that poses the question, what if…? What if rules restricting our freedom were brought in overnight? What if everything we take for granted now was taken away from us? What if we — and when I say “we”, I essentially mean white Western women for that is who this book is aimed at — could no longer earn money, be educated, lead independent lives?

There’s no denying that reading this book in the current political climate it’s hard not to see echoes of Trump’s America and the “new normal” in it  — by which I mean it’s a prescient warning about how quickly things can change and new regimes/eras can be ushered in before we’ve had a chance to realise what’s happening.

Interestingly, for a novel that’s written in such a coolly detached voice and with little or no dialogue in it, it is a highly engaging read. I can understand why The Handmaid’s Tale is a modern classic; it’s influenced many books that have followed, not the least Charlotte Wood’s The Natural Way of Things, which makes a nice companion piece to this one.

But even so, I felt slightly too old for this story to have too much of an impact on me: if I’d read it, say, in my twenties, I think its power might have resonated with me more. That said, it’s a terrific, albeit horrific, read.

18 thoughts on “‘The Handmaid’s Tale’ by Margaret Atwood”