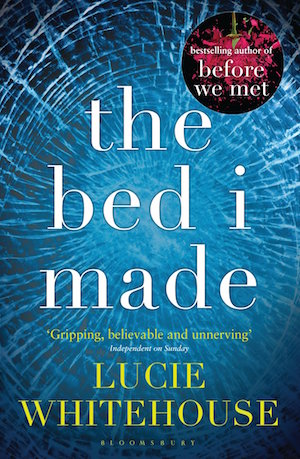 British author Lucie Whitehouse does a nice line in stories about women who fall in love with psychopathic men.

In her 2014 novel Before We Met, 30-something Hannah Reilly slowly realises that the man she has hurriedly married may not be the fine upstanding citizen and successful businessman he purports to be; in The Bed I Made, an earlier novel first published in 2010, Kate Gibson enters an erotically charged relationship with a successful property developer who isn’t quite as charming and kind-hearted as she initially thought.

Admittedly, both novels aren’t entirely believable, but who cares? I raced through The Bed I Made in a matter of a few days and found it got me over a minor reading slump (co-incidentally, Before We Met did exactly the same thing three years ago). I loved its gripping cat-and-mouse narrative, the atmospheric island setting and the compelling dynamic between two mismatched characters.

A new life on the Isle of Wight

The book opens with Kate, a translator, relocating from London to the wintry Isle of Wight, just off the Hampshire coast, for what appears to be a temporary change of scenery.  Here, she follows the case of a local woman who’s believed to be missing at sea, but before long it’s clear that it is Kate’s own life that is in danger.

In a fast-paced narrative that switches between the present and the past, we learn that Kate’s ex-boyfriend, an attractive man with whom she’d had a passionate relationship for more than a year, isn’t all he’s cracked up to be. Now she’s ignoring his increasingly insistent and worryingly nasty pleas, via email and text message, to get back together — but at what cost?

This psychological thriller ratchets up the tension and suspense the further you get into it, and Whitehouse weaves a gripping tale of a young woman being stalked by a dangerous man while trying to reinvent a new life for herself.

The atmospheric setting, of an insular, close-knit coastal community with its own secrets to keep, adds to the often overwhelming feeling of claustrophobia that ensues with each turn of the page.

Typical of this genre, the ending becomes slightly hysterical (for want of a better word) and my interest began to wane as soon as I realised Kate’s best friend had succumbed to Richard’s charms: the denouement was as predictable, and as over-the-top, as I expected.

Yet The Bed I Made is a wonderful form of escapism. It’s thrilling and tense, the sort of book that keeps you turning the pages long into the night. It’s not highbrow fiction by any stretch of the imagination, but sometimes it’s good to simply romp through a book without thinking about it too much.

This is my 3rd book for #20booksofsummer. I bought it in June 2014, based on the strength of Whitehouse’s Before We Met, which I reviewed that same month. I also bought her debut novel, The House at Midnight, which remains unread. Both were just £1.54 each as part of a Kindle promotion.

9 thoughts on “‘The Bed I Made’ by Lucie Whitehouse”