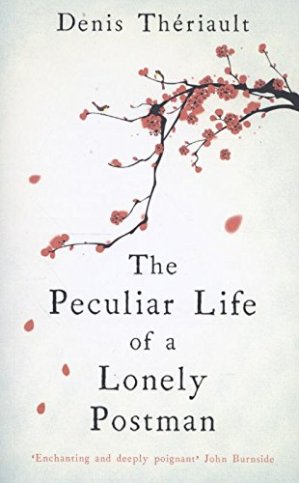 Denis Thériault’s The Peculiar Life of a Lonely Postman is one of the most unusual love stories I’ve ever read. Part fable, part treatise on Japanese poetry, it also “flirts with the fantastic” (as the author states in a Q&A published at the rear of the book) and delivers a quietly understated story about the power of the written word and the Buddhist concept of Ensō.

A man on a mission

Set in Montreal, Canada (where the author hails from), we are introduced to the postman of the title: 27-year-old Bilodo, who lives on the 10th floor of a high-rise apartment block with his sole companion: a goldfish called Bill. He rarely goes out, preferring to stay home to watch TV or play video games, but he loves his job and is super-efficient at it.

It wasn’t all roses, of course. There were those blasted advertising flyers to be delivered; the backaches, the sprains and other run-of-the-mill injuries; there were the crushing summer heatwaves, the autumn rains that left you soaked to the skin, the black ice in winter, which turned the city into a perilous ice palace, and the cold that could be biting, just like the dogs for that matter – a postman’s natural enemies. But the moral satisfaction of knowing oneself to be indispensable to the community made up for these drawbacks. Bilodo felt he took part in the life of the neighbourhood, that he had a discreet but essential role in it.

But Bilodo has a bit of a moral blind spot. If he comes across a handwritten letter — an increasing rarity in today’s modern world — he takes it home, steams it open, reads it, makes a copy of it for his records, seals the letter back up again and then delivers it the next day as if nothing has happened.

Through this illegal practise Bilodo stumbles upon a correspondence between Ségolène, a woman who lives in Guadeloupe (a French overseas territory, part of the Leeward Islands in the Caribbean), and Grandpré, an academic from Quebec.

The pair send haiku poetry to each other and Bilodo, transported by the beauty of three lines of five, seven, and five syllables apiece, soon finds himself falling in love with Ségolène, a woman he knows he will never meet. And so he undergoes a psychological transformation that has him leading the peculiar life of the title.

This short but powerful novella is deceptive in both its tone of voice (slightly mundane) and its subject matter (a dull man leading a dull life), but then about half way through it turns into something else entirely (although I will put up my hand and say that I predicted the major plot development that occurs). This is not one of those “happy” books where the lonely protagonist learns to live a more fulfilling life; there’s a really dark edge to it and a moral ambiguity at its core.

There’s something about the whole “atmosphere” of the story that is hugely reminiscent of Japanese fiction: the functional prose style, the themes of alienation, chaste love and loneliness, and the lovely poetry in it, both haiku and tanka (the oldest and most elevated classical Japanese verse form).

Even the ending, which is unexpectedly strange and unsettling but ultimately satisfying, brought to mind Taichi Yamada’s Strangers, one of the most compelling and intriguing Japanese novellas I’ve ever read. I could almost say the same about this one, although I realise it’s Canadian…

This is my 7th book for #20booksofsummer. I bought it in December 2014, partly because of Susan’s review at A Life in Books, for the princely sum of 99p.