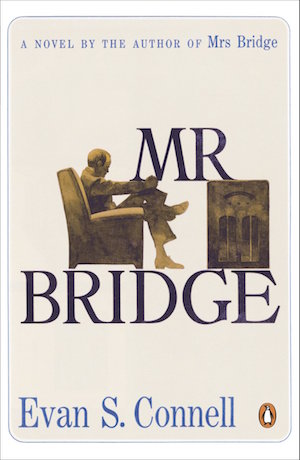 First published in 1969, Mr Bridge is a companion novel to Mrs Bridge, which was published a decade earlier.

I read and reviewed Mrs Bridge in 2013 and loved the way it told the quietly understated story of one woman’s married life in Kansas City largely before the Second World War. Mr Bridge tells the story from the husband’s perspective.

Like its predecessor, Mr Bridge is not a conventional novel. Yes, there is an overarching narrative — that of one man’s life moving forward from the beginning of his marriage through to his children becoming adults and forging lives of their own — but it’s told in an episodic style in brief, self-contained chapters, each one almost a short story in their own right.

There’s no real plot, apart from Mr Bridge and his family growing older, and the setting is purely domestic: think suburban America in the 1930s and 40s. It is, essentially, a portrait of a financially successful man who’s emotionally stunted, unable to fully connect with his wife or their children on any truly meaningful level and leading a fairly safe, yet dreary, life.

What makes the story so poignant (and perhaps frustrating) is that Walter Bridge lacks self-awareness: he has no real knowledge that his obsession with doing “the right thing” and shunning risks of any kind makes him an entirely dull and boring man. He’s a good provider, yes, but he never gives into frivolity or spontaneity and lives his whole life by a strict moral code where joy simply does not exist. The most excitement he can ever muster is giving his children stock certificates for Christmas, which he immediately takes back to manage for them.

Prejudices from another era

In his world of white male privilege, he does not think black people should go to college, fails to see the benefit of his daughters gaining an education when they’re simply going to be married off, and believes his wife is happy because she has all the material comforts for which she could wish.

The thing is Mr Bridge is not a bad person. He’s kind and often charitable. He wants the best for his children. And he works hard. But he never sees the room for self-improvement. Even when a friend of his wife tells him he’s an odd man, he doesn’t quite get it:

“You’re not as cold as you pretend to be,” she said. “I think your doors open in different places, that’s all. Most people just don’t know how to get in to you. They knock and they knock, where the door is supposed to be, but it’s a blank wall. But you’re there. I’ve watched you. I’ve seen you do some awfully cold things warmly and some warm things coldly. Or does that make sense?”
“I’d have to think about it,” he smiled, and picked up the menu. “What do you recommend?”

Perhaps the crunch comes right at the end, when Mr Bridge’s past actions come home to roost: his older daughter plans to marry an impoverished student he does not approve of; his son wants to join the military against his advice; and his long-serving secretary breaks down when she realises he takes her entirely for granted. And then, dragged to church by his wife to celebrate Christmas, he reflects that he has not known joy and that it is, in fact, beneath him.

He remembered [feeling] enthusiasm, hope, and a kind of jubilation or exultation. Cheerfulness, yes, and joviality, and the brief gratification of sex. Gladness, too, fullness of heart, appreciation and many other emotions. But not joy. No, that belonged to simpler minds.

This is my 15th (and final) book for #20booksofsummer. I have no memory of buying it, but I do know that it was at the same time as I bought Mrs Bridge, so it’s been sitting on my shelves for at least four years.