Let me get one thing out of the way: when Rachel Cusk’s Transit was named on the 2017 Giller Prize shortlist my heart sank. That’s because I’d read her previous novel, Outline, when it was shortlisted for the same prize in 2015, and I didn’t much like it. Knowing that this was a follow-up, I expected I probably wouldn’t like this much either. I was right.

A new life in London

Transit picks up where Outline leaves off — though, unusually, you don’t need to have read the first novel to understand the second.

The narrator, Faye, is a writer with two young sons. Newly divorced, she returns to London to start her life afresh. She purchases an ex-council flat in need of serious renovation and finds that her neighbours aren’t particularly pleasant, but doesn’t let this bother her.

There’s no real plot. The narrative revolves around a series of interludes or interactions that the narrator makes with other people — a varied cast including an ex-boyfriend, a builder, one of her students, an unmarried friend and her hairdresser — as she goes about her day-to-day life as a creative writing tutor. This lends Transit more the feel of a collection of short stories, rather than a novel. 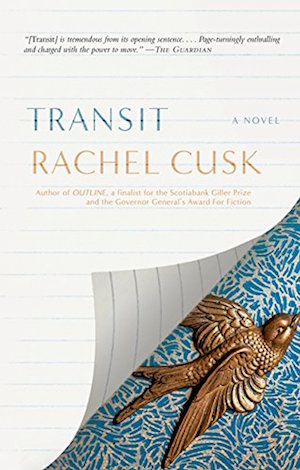 Cover of the Canadian edition

This unusual structure does achieve one thing: it slowly builds up a picture of Faye, a passive character who doesn’t shy away from casting judgement on other people. She’s often full of cod philosophy and is (wearily) opinionated, but she’s not particularly endearing.

For instance, during the course of the novel, her children are staying with their father while the builders work on her apartment, but every time they call her she seems cross that they’ve interrupted her day. Even when they call in tears, she doesn’t seem to offer much by way of maternal consolation.

The fragmentary nature of the story is not helped by the aloof tone of voice that is adopted throughout. While the writing is eloquent and insightful, dotted with wisdom and a pseudo intellectualism, the dialogue often feels contrived and not particularly authentic. Nothing ever seems to properly gel.

Despite this, I did enjoy specific chapters (the one set in the hairdressing salon was strangely engaging), but overall I found Transit to be a chore to read and I came away from the entire book feeling mostly ambivalent about it. I think it is fair to say that Rachel Cusk is simply not a writer for me, but you may find otherwise.

28 thoughts on “‘Transit’ by Rachel Cusk”