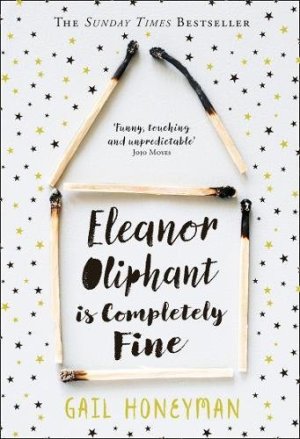 I do not light up a room when I walk into it. No one longs to see me or to hear my voice. I do not feel sorry for myself, not in the least. These are simply statements of fact.

Meet Eleanor Oliphant, a 30-year-old single woman, who lives in Glasgow and works as a finance administrator in a design firm. She has no family and no friends. Her life is guided by routine: lunchtimes doing the crossword puzzle in The Telegraph, evenings in front of the TV, and weekends spent at home consuming two bottles of cheap vodka.

Then there’s the regular Wednesday night phone call with “mummy”, who is locked up in an unspecified facility (read jail) and badgers her daughter about her “special project”. That special project, it turns out, is Eleanor’s plan to woo a man she’s been admiring from afar: a rock singer she thinks is “the one”.

But when that project goes off the rails, Eleanor’s fragile grip on life (and reality) threatens to derail more than just her one-sided romance.

This astutely written debut novel by Gail Honeyman is quirky and humorous and deeply affecting. It goes into some very dark places, but emerges with a strong feeling of hope and optimism for the future.

Its central character, the eponymous Eleanor Oliphant, is an oddball: she lacks self-awareness, finds it difficult to make friends, is socially awkward and yet she’s never afraid to do her own thing.

Her contrary, judgemental voice gives the novel a distinctive flavour, peppered as it is with archaic language and outrageous comments — a red-faced man, for instance, is said to have “the pasty look of someone who has never eaten an apple”;  a woman’s makeup is described as being as subtle as if it had “been intended for a stage performance in the Royal Albert Hall”; and her friend is said to be wearing “the kind of hat that a German goblin might wear in an illustration from a nineteenth-century fairy tale, possibly one about a baker who was unkind to children and got his comeuppance via an elfin horde. I rather liked it.”

Black comedy is never far away:

The last party I’d been to – apart from that appalling wedding reception – was on Judy Jackson’s thirteenth birthday. It had involved ice skating and milkshakes, and hadn’t ended well. Surely no one was likely to vomit or lose a finger at an elderly invalid’s welcome home celebration?

But balancing out the snide laughs and the eyeball rolls is a sense of pathos and empathy, as the author oh-so casually and ever so slowly offers a steady drip feed of information that forces the reader to constantly reassess their opinion of this opinionated narrator.

We know that Eleanor struggles to fit in, but when we discover early on in the book that she has a badly scarred face, there’s a sudden “a-ha” moment. Other hints about a dark past and the ongoing strained relationship with her mother, makes the reader want to know more: how did Eleanor’s injuries occur? Why does she have to see a social worker? Why is her mother locked up? Why does she feel the need to dampen down her feelings with so much vodka?

All these questions combined with exemplary narrative pacing makes Eleanor Oliphant is Completely Fine a proper page turner. Forgive the capitals – and the book reviewers’ horrible cliché — but I COULD NOT PUT IT DOWN.

As you will undoubtedly know if you’ve read my blog for any length of time, I usually run the other way when the bandwagons come along, but this book really is as good as the hype. It might be slightly too long, and Eleanor’s voice takes a while to warm to, but once you’re in the throes of the story it’s hard to resist its charms. I predicted most of the plot turns, but it’s such a genuinely thoughtful, kind-hearted and touching novel I didn’t really mind.

I loved its perceptive examination of loneliness, the human need for companionship and the ways in which the past can continue to haunt the present and the future. But overall I loved the message that you cannot live your life by a timetable: change, spontaneity and daring to try new things are much more important.

Finally, I must also mention that this book gets extra kudos for the simple fact that it name-checks (and pokes the fun out of) a magazine I once worked on. Notting Hill (the film), eat your heart out:

‘I don’t see her as a Take a Break reader, somehow. It’d be something much weirder, much more random. Angling Times? What Caravan?’ ‘Horse and Hound,’ said Billy firmly, ‘and she’s got a subscription.’ They all sniggered. I laughed myself at that one, actually.

26 thoughts on “‘Eleanor Oliphant is Completely Fine’ by Gail Honeyman”