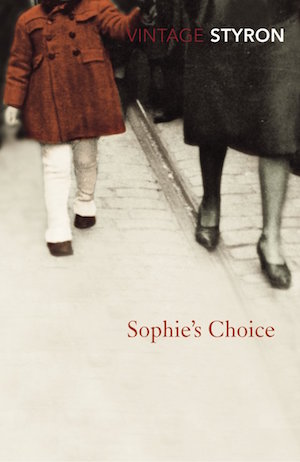 First published in 1979, Sophie’s Choice by William Styron is often regarded as a landmark of holocaust fiction, not least because of the controversy it stirred up at the time of publication: Styron was accused of revisionism, because he presents the view that the Holocaust was not solely or exclusively directed at the Jews and that the camps were merely an initiative to secure labour for the German war effort; and the book was banned in several countries because of its explicit sexual content.

I read it because I was looking for something meaty and compelling to get me through a long-haul flight to Australia, so I packed it in my hand luggage and then spent the next three weeks carting it around with me, reading it on planes, in quiet moments before lights out, in the sun on a succession of balconies and decks — always in places where my surroundings seemed vastly more pleasant than the contents of the book.

I didn’t actually finish it until I was back in the UK. And even though it’s a rather brilliant novel, intimate in tone, languid in its storytelling and with a breadth and scope to far outweigh many contemporary novels, I was rather relieved to get to the end. I have very mixed feelings about the book as a whole.

Before I explain what I did and didn’t like about Sophie’s Choice, let me give you a brief recap of the plot. If you have seen the 1982 film adaptation starring Meryl Streep (for which she won an Academy Award for Best Actress) this might already be familiar, but I haven’t seen the movie and am unsure how faithful it remained to the book. Forgive me, then, if I repeat stuff you know already.

The story is told from the point of view of a writer named Stingo looking back on a seminal year in his life some 30 years earlier. In 1947, fired from his job working for a big book publisher in Manhattan, he moves into a cheap boarding house in Brooklyn to begin working on a novel. Here he befriends two boarders living in the rooms above his — Nathan Landau, a Jewish American, who is a biochemist, and Sophie Zawistowska, a Polish Catholic, an Auschwitz survivor. Both Nathan and Sophie are in a rather tempestuous relationship, which becomes increasingly more violent as the novel progresses.

Stingo becomes a close friend of the couple, especially Sophie with whom he is secretly in love. She trusts him enough to tell him about her troubled life in Poland and confesses a series of shameful secrets that continue to plague her. One of these secrets — and this is where I’d advise you skip ahead to the next paragraph if you haven’t yet read the book — is the fact that upon arrival at Auschwitz, a cruel camp doctor forced her to decide which of her two children should be sent to the gas chamber immediately and which should be allowed to live on in the camp. It is this horrendous decision upon which the entire plot of the novel hinges, because after this confession Sophie plunges into a deep alcoholic depression from which there is no return.

Here’s what I liked about the story:

1. The prose style is intimate and feels confessional. The sentences are long and often overly verbose, but there’s a lot of heart in the story-telling. It’s almost as if Stingo has pulled up a chair by the fire to tell you — and only you — how a single year of his life left a marked impression on everything that followed. This style helps avoid the story plunging into a pit of despair. While the bits about Auschwitz and Sophie’s life in Poland — which are told flashback style — are heavy going and morbid, on the whole the book has a light, floaty feel because the prose doesn’t take itself too seriously. And there are some quite funny moments too — especially the early chapters about Stingo’s job.

2. The structure is non-linear, so the morbid bits (Auschwitz) are interleaved with more exciting elements (Brooklyn). A succession of major revelations being dropped in when the reader last expects it also helps maintain interest and intrigue over the course of more than 600 (long) pages.

3. The characterisation is superb. The main trio of characters are incredibly well drawn — you expect them to walk off the page — and even the subsidiary characters, such as Stingo’s father and his landlady, feel vibrant and real.

1. It’s too long. There’s quite a lot of repetition — about slavery, about Sophie’s beauty, about Nathan’s increasingly chaotic and unpredictable behaviour — so could easily have lost a couple of hundred pages in a ruthless edit and the book would not be the poorer for it.

2. There’s too much explicit sex in it. I get that it’s written from the point of view of a sex-craved 22-year-old male virgin, but do we need to read about it on every second page? And, yes, it’s the late 1940s before the ready availability of contraception, but it seems unfair to portray every woman as being frigid or — excuse the language — cockteasers because they won’t put out. This point of view is so overtly male (and sexist) I could barely contain my rage reading it!

3. There’s too much emphasis on Sophie’s beauty. As per point 2, I understand that Stingo is obsessed by Sophie, but constant reference to her bust, her backside, her pouty lips and her sexual exploits with Nathan wears thin very quickly. This sexual objectification shifts the emphasis from Sophie’s psychological trauma towards her physical attributes so that we never get a real handle on how her experience affected her mentally. The idea that she was far too beautiful to deserve the Nazi’s cruel treatment begs the question, did only ugly people deserve to be exterminated?

And don’t get me started on the way her sexual appetite is depicted.

Those negative points aside, there’s no doubt that Sophie’s Choice is a 20th century classic. It’s ambitious — in scope, in structure, in storytelling — and tells a horrific story in a compassionate, compelling way. It’s slightly unweildly and not without its faults, but as an examination of human failings, of racism, of religion, of politics and American life in aftermath of World War Two it feels authentic, important — and powerful.