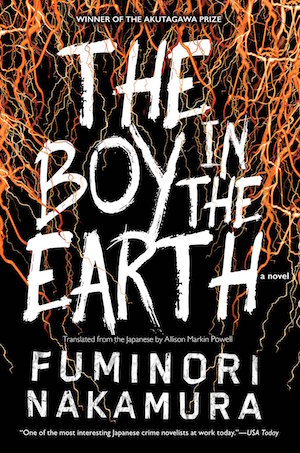 The Boy in the Earth is the latest novel by Japanese writer Fuminori Nakamura to be translated into English. I had read two of his earlier works — The Gun (translated in 2016) and The Thief (translated in 2012) — to be interested enough to pre-order this one, which arrived in the post a couple of weeks ago.

First published in 2005, this book is Nakamura’s fifth novel. Winner of the Akutagawa Prize — one of Japan’s most important literary awards and presented twice a year since 1935 —  I don’t think it stacks up against the previous two I have read, but it’s a quick, haunting read nonetheless. If you’re feeling a bit low I would caution against reading it though — The Boy in the Earth plumbs some seriously dark territory and has a strong nihilistic streak running through it.

It’s narrated in the first person by a young Tokyo taxi driver, who has obsessive fantasies about dying. In each of these fantasies he envisions himself returning to the earth, being subsumed by the ground and becoming at one with the dirt around him.

It’s only mid-way through the book that the reader comes to understand the reasons for this strange obsession.

There’s not much of a plot.The Boy in the Earth is basically a character study, although I’d argue it’s not even much of one of those. We glean few insights into the unnamed character’s personality other than the fact he’s plagued by suicidal thoughts, cares little for his “girlfriend” (a woman who sleeps with him in exchange for sharing his apartment rent free) and has no family or friends. He’s a loner and an outsider.

The prose style is very pointed: it’s pretty much adjective free and every word is chosen to move the storyline forward. It feels pedestrian, but as the narrative plods ahead, there’s a frisson of suspense when the taxi driver discovers the father who abandoned him as a child wants to re-establish contact. Should he take the plunge and meet him? Or turn his back and walk away?

As you may have gathered The Boy in the Earth isn’t a cheery read — and I haven’t even told you about the grotesque abuse at the heart of it. It focuses very much on themes that seem to dominate the few Japanese novels that I’ve read — alienation, love, loss and loneliness — and adds a new twist: what happens to children who suffer horrendous abuse and grow up to become adults? Will they ever find a way to live their own lives? Or is death an easier option?

6 thoughts on “‘The Boy in the Earth’ by Fuminori Nakamura”