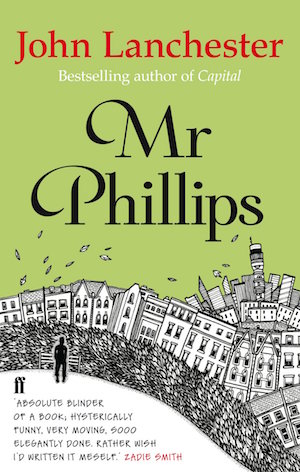 First published in 2000, Mr Phillips is John Lanchester’s second novel. To be perfectly frank, I hated it.

The story is set on one day in the late 1990s. Mr Phillips, an accountant at a catering services supply company, has been made redundant but is too embarrassed to tell his family. Instead, he dresses for work as per normal and heads off to the train station for his daily commute into central London, where he then wanders around to fill in the hours before he’s expected home.

Written in the third person but entirely from Mr Phillips’ point of view, the narrative painstakingly follows every step, every interaction and every thought he has between leaving home that morning and returning that night. It’s a rather exhaustive narrative, highly detailed and packed with the minutiae of one man’s life.

My hackles began to rise pretty early on in the book when Mr Phillips, wandering around Battersea Park, runs into a pornographer, who strikes up a conversation with him.

Speaking as a pornographer, I can tell you that the important thing is never to try and work out what a woman is thinking. It only confuses you and they change their minds so much anyway the main thing is just to steam ahead with your plan intact.

And while I know you should never confuse a horrid character’s thoughts with the author’s own beliefs — they are not one and the same thing — I couldn’t help but wonder why the entire storyline of Mr Phillips revolves around one man’s one-track mind. (Well, okay, two-track mind: when he’s not thinking about sex he’s thinking about numbers — he’s an accountant after all.)

Perhaps I shouldn’t have been surprised by the content given the novel’s opening line:

At night, Mr Phillips lies beside his wife and dreams about other women.

But I quickly lost interest in this rather mundane story of a middle-aged man’s (monotonous) interior monologue, and by the time he’s had lunch with his adult son in Soho (and I find out that the son objectifies women as much as his father does) I’d already decided I didn’t much like this book.

Then, when Mr Phillips wanders into a sex club and watches a show, I was positively ready to throw my Kindle across the room. The descriptions were so lurid and revolting I ended up skipping through the entire section and then suddenly found Mr Phillips caught up in a bank robbery. I mean, the whole book is kind of preposterous and not easy to believe.

If  I could salvage anything positive from the novel it would be this: Mr Phillips’ expertly drawn characterisation, of a dull boring man with a rich interior life (I didn’t hate him, I didn’t feel sorry for him, I just wish he wasn’t so tiresome) is only matched by the vivid detail of London’s neighbourhoods, many of them familiar to me, such as Clapham, Battersea, Chelsea and Soho, which truly bring the capital to life. But on the whole, Mr Phillips will probably be the worst book I read all year and now I’m not sure I want to read anything else by this author…

This is my 9th book for #20booksofsummer. I bought it in 2012, another 99p Kindle bargain, probably because I wanted to read more by this author. I’ve seen him at many literary events over the years and really loved Fragrant Harbour, his third novel published two years after this one, when I read it in 2010.