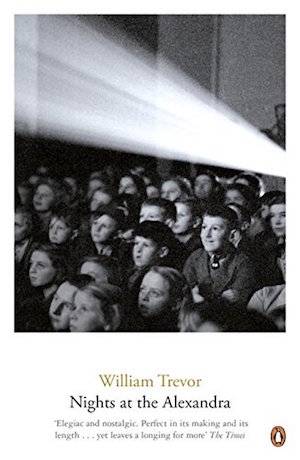 William Trevor’s Nights at the Alexandra is a bittersweet novella about love, longing and devotion.

Brimming with nostalgia, it is told through the eyes of Harry, a 58-year-old bachelor looking back on his teenage years in provincial Ireland during the “Emergency” (Second World War).

Through Harry’s reminiscences, we learn he comes from a “Protestant family of the servant class which had come up in the world” and he had been expected to work in his father’s timber yard as soon as he finished his schooling.

But when, as a 15-year-old, he met Frau Messinger, a young British woman married to a German man twice her age, Harry’s eyes were opened to an alternative future.

This is how Harry describes his first meeting with the woman who was to have such a long-lasting impact on his life:

She was an extremely thin, tall woman, her jet-black hair piled high, her eyes blue, her full lips meticulously painted: I had never seen anyone as beautiful, nor heard a voice that made me so deliciously shiver. ‘You looked for a blemish on her hands, on the skin of her neck or her face,’ I wrote in a notebook I kept later in my life. ‘There wasn’t one. I could have closed my eyes and listened to that husky voice for ever.’

Their platonic friendship is formed when she stops Harry in the street one day and asks him to deliver a flat car battery to the garage for her. She then asks him to bring a new one to Cloverhill, the big stone house on the edge of the village, where she lives.

This one request turns into a regular “gig” running errands and delivering packages for Frau Messinger, who often invites Harry into the house for tea, cake and conversation.

The relationship is an intimate but chaste one. She tells him stories about her life and writes him long letters when he’s away at boarding school in England. When his school friends tease him about it, he’s embarrased by their taunts. (“Houriskey wanted to know if I ever got a look about her skirts. At Liscoe grammar school there was a lot of talk like that; all humour was soiled, double meanings were teased out of innocence.”)

It’s only when Harry’s mother discovers that “the woman at Cloverhill” has given him a tie pin that he is forbidden from seeing her, a decision that he later defies.

Nights at the Alexandra is a book that is as much about being an outsider as it is about growing up and taking a stand against your parents, for the Messingers are refugees, friendless in small town Ireland because everyone assumes they are Jews, and Harry is a Protestant in a largely Catholic country, sent away to England to go to school and expected to work in the family business when he graduates.

When Herr Messinger decides to build his wife a cinema — The Alexandra of the title — he asks Harry to run it. As much as he does not want to work for his father, Harry is torn, because he’s not sure he wants to run a movie theatre either, but later, partly in defiance of his parents but mainly through his love for Frau Messinger, he jumps at the chance to do so.

The story drips with Trevor’s trademark flair for melancholy and missed opportunities, and his prose is typically elegant and elegiac. The book is just 60 pages long but it’s written so tautly, with nary a word wasted, that it feels so much more powerful and authentic than a book, say three or four times longer, might.

It’s the mood of the novella that makes it such a memorable, haunting read, one that lingers in the mind long after the final page has been finished. Poor heartbroken Harry and the kindly Messingers will stay with me for a long time.

This edition of Nights at the Alexandra (first published in 1987) comes with two additional short stories — The Ballroom of Romance (first published in 1972) and The Hill Bachelors (first published in 2000) — which carry on the melancholy theme. Both are set on Irish farms in the hills. In the first, Bridie realises her hopes of finding a husband have been dashed now that she’s trapped on the farm looking after her father who has had a leg amputated; and in the second, Paulie returns home to help his widowed mother and reluctantly settles into a new life as a “hill bachelor” when all the women of marriageable age that he courts don’t want to take up with him.

This is my 16th book for #20booksofsummer (yes, I’m still playing catch-up with reviews). I bought this one earlier in the year, attracted by the new livery that Penguin has used to republish all of Trevor’s wonderful stories. I’m mighty tempted to buy the whole set: I’m yet to read anything by this author that I haven’t immediately fallen in love with. You can read all my other reviews on my William Trevor page.

15 thoughts on “‘Nights at the Alexandra’ by William Trevor”