‘A Crime in the Family’ by Sacha Batthyány 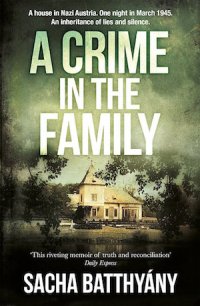 A Crime in the Family is a compelling memoir that looks at two of my favourite subjects: moral culpability and intergenerational guilt.

Written by Swiss journalist Sacha Batthyány in an engaging but forthright tone, it combines autobiography with family history (the Batthyány family is so distinguished it has its own Wikipedia page) and explores what it is like to discover that one of your ancestors has carried out a horrendous war crime that has remained secret for decades.

The book’s main focus is one particular night in the spring of 1945 when Sacha’s great aunt, Countess Margit Batthyány, threw an extravagant party for German aristocrats and Nazi SS officers in her ancestral home —  a castle — in the Hungarian village of Rechnitz. Part of the “entertainment” included the “sport” of shooting 180 Jewish workers dead and burying them in a mass grave.

Batthyány uses family diaries from the time to tell the story and marries this with accounts of his own therapy sessions and journalistic research. At times the book reads like a travelogue, as Batthyány, often accompanied by his father (with whom he has a troubled relationship), visits landmarks associated with his dark family history, including the gulags of Russia and the extermination camp at Auschwitz. He also travels to South America to meet the descendants of some of the Jews who were killed in the massacre.

This is a tragic and moving memoir about complicity, reconciliation and shining a light on the truth. Highly recommended.

‘A Book of Untruths’ by Miranda Doyle

A Book of Untruths is an unusual but thought-provoking memoir that raises more questions than it answers.

Structured around a series of lies — 70 “untruths” in total — Doyle explores not only the complicated nature of her family (her parents had a troubled marriage and her father was a larger-than-life unpredictable character), but also the unreliability of memoir writing as a whole. How dependable are our memories? Where does fact become fiction? How does storytelling help us make sense of our own lives and the world we live in?

Doyle’s desperate need to understand the complicated nature of her parent’s marriage and her own messy, tangled upbringing (including her complex relationship with her three siblings), lends this memoir a ring of authenticity. Written in exquisite but punchy prose, A Book of Untruths isn’t a misery memoir, but it is fuelled by a deep anger and is undercut with enough self-deprecating humour to make it an enjoyable if somewhat curious read.

‘Mayhem: A Memoir’ by Sigrid Rausing

Many people may know Sigrid Rausing as the editor of Granta magazine and the publisher of Granta Books, but she is from a wealthy Swedish family which made its fortune from food packaging (her grandfather co-founded Tetra Pak). Curiously, this memoir isn’t about Rausing’s life; instead it is about her sister-in-law’s death.

Eva Rausing, one of the wealthiest women in the UK, died of a drug overdose aged 48  in the summer of 2012. Her body was found in the London mansion she shared with her husband, Hans (Sigrid’s brother), under a pile of clothes in a barricaded bedroom. Hans was charged with preventing the lawful and decent burial of his wife and later sentenced to 10 months in jail.

Mayhem: A Memoir looks at the outfall of this death on the Rausing family, but much of its focus is on the years preceding the tragedy, for both Hans and Eva were drug addicts (they met in rehab) and were so entrapped by their respective addictions they had given Sigrid and her husband Eric custody of their four children.

Heartfelt, searing and deeply reflective (but occasionally tinged with self-pity), the book emphasises the collateral damage that drug addiction wreaks on entire families and shows that being born into immense wealth offers no protection against tragedy.