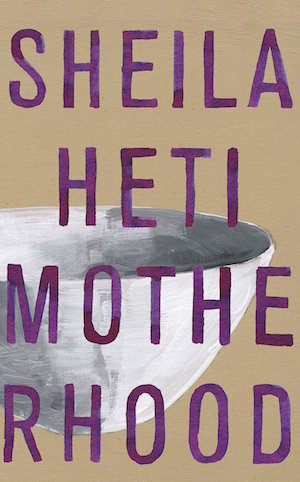 Sheila Heti’s Motherhood, which has been shortlisted for the 2018 Giller Prize, won’t be for everyone. I’d argue that it has a quite specific audience. It seems to be the kind of book that is aimed primarily at women of child-bearing age who haven’t quite made up their minds as to whether they want to have children or not.

It’s fictional, but because it’s written in the first person and doesn’t really have a plot (indeed, it doesn’t really have any characters aside from the narrator and her boyfriend), it feels like non-fiction. As I read through it I had to keep reminding myself it wasn’t reportage; it was an extended piece of creative writing exploring a simple idea: how do you know when it’s the right time to reproduce, and what do you do if you decide that’s not for you?

Written in direct first-person text, almost as if the author is trying to talk herself into — or perhaps out of — making a decision, it’s occasionally humorous and often illuminating, but mostly — and I hate to say this — it’s downright self-indulgent. (Navel-gazing is another term that springs to mind.)

As you’d expect for a book with a philosophical bent, it explores lots of interesting ideas about what it is to be a mother (doing what you, as a woman, were supposedly put on earth to do, for example) as well as what it is to be woman of child-bearing age who chooses not to bear children (helping the planet by not adding to the world’s population, is just one theory posited).

There’s some thought-provoking analysis on what it is to lead a creative life — in this case, as a writer — and whether having children lessens that ability or enriches it. Does raising children take away the energy and stimulus that is required for the imagination to function properly?

But the book’s structure is odd. It over-relies on the device of flipping coins to answer certain questions (inspired by the ancient Chinese “art” of I Ching), which is novel to begin with but soon wears thin.

There’s also a lot of over-reliance on dreams (this is a pet hate of mine in novels) and what I would call “hocus-pocus” (whether in the form of religion, fortune-telling or destiny), but these do serve an important function: to help the narrator determine whether making the decision to have a child is something over which she can take control, or whether it’s up to the gods to decide.

It’s certainly an interesting premise for a novel, but it’s weighed down by too much middle-class angst for my liking.

As a woman who chose not to have children, I’m afraid there was nothing new in this book for me. I suspect if I had read Motherhood 10 or 15 years ago it would have resonated and perhaps shown me that there is no right answer: your life isn’t better or poorer for having children, it’s just different if you choose not to become a mother.

15 thoughts on “‘Motherhood’ by Sheila Heti”