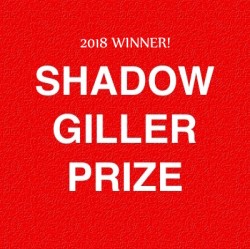 Tonight the winner of the Giller Prize will be named in Toronto, Canada.

In keeping with tradition, the Shadow Giller jury named our winner yesterday. You can see our announcement on KevinfromCanada’s blog.

I’ve been shadowing the Giller Prize for seven years now and this is the first year the jury has unanimously agreed on the winner. We didn’t even have to discuss it: we all ranked it right at the top of what turned out to be a surprisingly strong and robust shortlist.

As luck would have it, I’ve been so busy lately (with two separate trips to Dublin and a heavy workload) that I haven’t had time to review our winning title yet. I can tell you that it is an amazing book, quite unlike anything I’ve ever read before. It’s an amazingly rich and ambitious novel, multi-layered and focused on storytelling, the lies, legends and mythology we create within families, and the ways our lives are littered with coincidences and small incidents that later take on bigger importance even if we don’t know it at the time. It’s safe to say it knocked the others right out of the ballpark.

It will be interesting to see whether the official jury chooses the same book as the Shadow jury… stay posted for an update.

UPDATE — TUESDAY NOVEMBER 20: Congratulations to Esi Edugyan, whose novel Washington Black was named winner of the official Giller Prize last night. It is the second time Edugyan has won this award; she also won in 2011 with Half Blood Blues. You can read my review of Washington Black here.