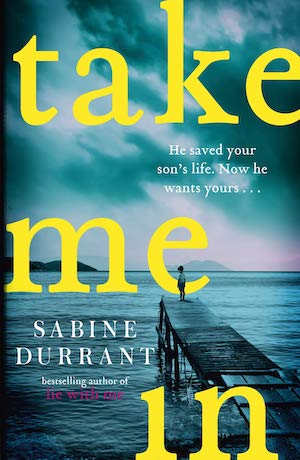 Last summer I was completely besotted by Sabine Durrant’s Lie to Me, a wonderfully dark thriller set on a Greek island, so when I saw her latest one on special offer at WH Smith just as I was about to board a long haul flight, I couldn’t resist buying it.

Take Me In turned out to be another gripping psychological thriller, one that had me furiously turning the pages in a bid to find out what happens next.

It’s set in modern-day London, but opens on a Greek island, where middle-class couple, Marcus and Tessa, have gone for a week-long holiday designed to save their failing marriage. Their three-year-old son, Josh, is with them.

One afternoon, on the beach, Josh nearly drowns and is rescued by a fellow holiday maker — a bald-headed, tattooed Brit called Dave Jepsom — who dives into the ocean to save him. Marcus and Tessa, caught out by their own parenting inadequacies, feel indebted to Dave, even though they don’t much like him.

When they return to London, their marriage still intact (but only just), they find that Dave, who claims to be “in construction” and lives in Essex, has seemingly inveigled his way into their lives. He turns up on their doorstep uninvited with gifts for Josh and, on a separate occasion, to fix the couple’s leaky bathroom tap. At other moments, he appears in the shadows, spotted at restaurants, in shopping centres, in local streets, almost as if he is spying on them.

What does Dave want? And does he pose a threat to Marcus and Tessa’s safety?

The story is told from two points of view in alternate chapters marked Him (Marcus) and Her (Tessa). This allows us to see their individual take on things (Marcus often feels inadequate as a man when he compares himself with big, beefy Dave; Tessa simply feels sorry for him but would rather he was not a part of their lives) and to find out more about their own internal thought processes. (Annoyingly, the tone of voice in both is quite indistinguishable, and Marcus doesn’t feel quite “male” enough to me, but that’s a minor quibble.)

It soon becomes clear that though they are both well-meaning people, they’re not particularly nice. Marcus is too focussed on his career as co-founder of a crisis management firm to much care about his family at home — it’s all about being on call 24 hours a day and saving brands from self-combusting — while Tessa feels so insecure as a mother and house wife that she’s having an affair with a man she once worked with when she was in PR.

They’re low-key social climbers, materialistic and over-protective of their child (except, of course, when he’s swimming at the beach). And they’re both paranoid that everything they’ve worked for might one day be taken from them, which goes some way to explain their fear of Dave and what he might be plotting.

As well as being a fast-paced psychological thriller, Take Me In is also a story about modern manners and morals — how do you thank someone for saving your son’s life? how do you extricate yourself from relationships you don’t want? is it okay to make friends with people from backgrounds so unlike your own? — and the irrational fears held by some middle class people against the working class.

It’s also a clever dissection of a troubled marriage and the burdens we can place on women to find fulfilment in the home if they give up their careers, as well as looking at the ethics of running a business where dodgy money is concerned.

And while the ending is a bit of a let down, the kind that throws open more questions than solutions, it’s a good put-your-brain-in-neutral read and it made a plane trip and a couple of days chilling out noticeably more entertaining for me. I will definitely read more by Sabine Durrant in the future.

3 thoughts on “‘Take Me In’ by Sabine Durrant”