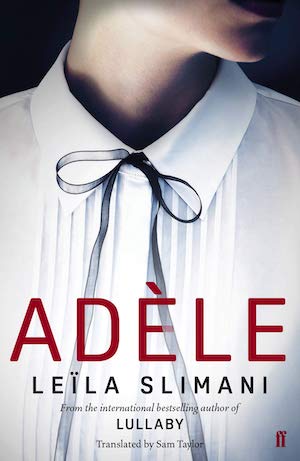 Fiction – paperback; Faber and Faber; 224 pages; 2019. Translated from the French by Sam Taylor. Review copy courtesy of the publisher.

Last year I read Leïla Slimani’s much-lauded Lullaby, a novel about a nanny who murders her young charges, and I had such a bad reaction to it that I wanted to throw the book across the room. My initial gut reaction was tempered (slightly) by the discussion that followed in the comments and that continued on Twitter and I came to see that perhaps I had missed the subtleties of the book, which was based on a true story. (I hadn’t known that at the time I read it.)

Adèle, her follow-up, has just been published in the UK, but it’s actually her first novel (published in France in 2014) and has simply been translated out of order.

Going on my past experience with her work, I picked it up with trepidation, telling myself that if I wasn’t hooked within the first 50 pages, I would abandon it. I ended up reading the entire book in two sittings. 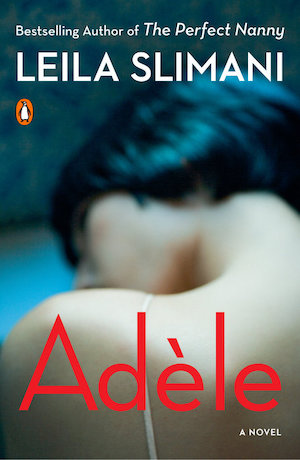 On the face of it, the book deals with another ugly subject: a married woman — the Adèle of the title — who has a penchant for rough sex with a succession of strange men she picks up in the unlikeliest of places. But it is so much more than this.

It is a deeply provocative look at modern life and privilege, of having it all but of never being quite satisfied, of one particular woman’s struggle to seek forbidden physical encounters to make her feel alive and to fill up the emptiness within her inner-most self. It is also an extraordinary examination of self-deception and self-destruction.

That Adèle has a successful career (as a journalist), a young son and a rich husband (who is a surgeon), and that she lives in a comfortable middle-class area of Paris in a beautiful apartment, makes one wonder what exactly is missing from her life.

But look a little closer. Adèle is clearly bored and doesn’t have much of a maternal instinct, but I think the real nub of it lies in her decision to marry the first man who asks her, choosing comfort and financial security over love, a fact she willingly admits to her best friend. And because she doesn’t have that true bond with her husband it makes it easier for her to betray him. It also makes it easier for her to compartmentalise her sexual encounters as being purely physical events and not emotional ones.

Adèle is neither proud nor ashamed of her conquests. She keeps no records, recollects no names, no situations. She forgets everything very quickly, and that is a good thing. How could she remember so many different skins and smells? How could she recall the memory of the weight of each body on hers, the width of their hips, the size of their penis? She has no clear memories of them, and yet these men are the sole landmarks of her existence.

Perhaps the most unsettling thing about Adèle is not the often graphic descriptions of the one-night stands and extra-marital affairs (be warned, this book isn’t for the prudish or even the squeamish), but of her lack of interest in food. Adèle never eats. She’s painfully thin. That no one ever seems to notice this is worrying.

Of course, I realise I’ve written 500 words and not really outlined the plot, but it’s a simple one, and you can probably guess how it pans out given it’s about a woman who strays outside of her marriage: her husband discovers her secret life. What you won’t expect is how he deals with it, and how their relationship morphs into something else entirely, and the effect that has on both of them, making Adèle an intriguing portrait of a marriage before and after the outfall of its potential destruction.

The prose is also sharp and clear (it was translated from the French by Sam Taylor) using short but vivid sentences — “Paris is orange and deserted” — where not a word seems to be wasted. And the pacing is quick-fire and suspenseful.

17 thoughts on “‘Adèle’ by Leïla Slimani”