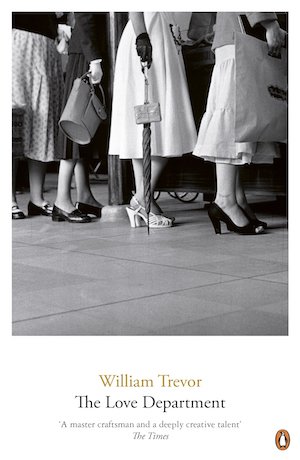 As you may have noticed, I’ve been reading a lot of William Trevor’s novels lately — and here’s another one.

First published in 1966, The Love Department was his third novel. Like his two earlier novels — The Old Boys and The Boarding House — it is set in suburban London (Wimbledon, to be precise), has a rather cutting comic element running throughout and stars a cast of suitably eccentric characters, including:

The narrative, which moves along at a cracking pace, charts Edward’s often farcical attempts to find his quarry. A nervous, anxious type, he’d much prefer to sit in the office and answer letters from readers, but Lady Dolores refuses to let him pen a word: she wants him out on the street doing old-fashioned detective work to track down the scheming Lothario breaking hearts and ripping off women in the suburbs.

It’s told in a dry, detached manner that only makes the humour — and the dialogue — more pronounced.

The Love Department is essentially a farce filled with uproariously funny moments — there’s one scene involving a pet monkey running amok at a dinner party that had me in stitches — but this is a William Trevor novel, so it’s tempered by pathos and there’s a rich vein of social commentary lying just beneath the surface, too, which examines loneliness, heartache and melancholia. It’s a very fine — and darkly comic — read, one that has proved to be my favourite of his first three novels.

This is my 13th book for #TBR40. I bought it second-hand several years ago (as part of a trilogy of Trevor’s early novels). You can read all my other reviews of his work on my William Trevor page.

9 thoughts on “‘The Love Department’ by William Trevor”