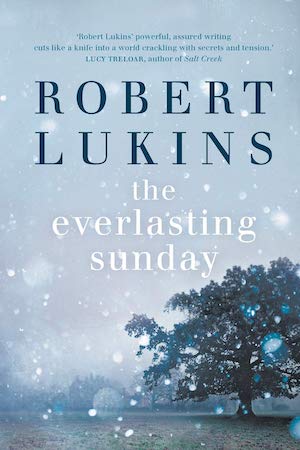 Melbourne writer Robert Lukins’ debut novel The Everlasting Sunday is set in a boys’ reform school during the UK’s “big freeze” of 1962-63.

This cold, atmospheric setting is only matched by the chilling goings on in the school, which culminate in a shocking denouement.

But this is not a thriller, psychological or otherwise (as you might expect), but a carefully composed study of friendship, alliances, survival, betrayal and trust.

When the book opens we meet 17-year-old Radford as he arrives at Goodwin Manor, a home for boys who have been “found by trouble”.

We do not know what trouble has found Radford, but we do know he has been driven from London to the Shropshire-based manor by his uncle, who makes the return journey as soon as Radford has alighted from the vehicle. (The pretense is that he doesn’t want to get trapped by the looming snowstorm, but the reader does wonder whether Radford might have done something so ugly and abhorrent that his uncle can’t wait to be rid of him.)

From thereon in, alone in the world, the suicidal Radford adjusts to a strange new territory, reigned over by the kindly and eccentric “headmaster” Teddy, who has troubles of his own.

The school has no real rules or structured timetable; the boys are free to attend lessons on an adhoc basis if they wish (Radford enjoys learning about “the art of electronics” presided over by a long-haired instructor called Manny), or they may prefer to help with repairs — “the manor was in a persistent state of decay” — or go for long walks in the countryside. The only female presence is Lillian, the cook.

As he settles in, Radford is drawn to West, another boy, who takes him under his wing and the pair form an alliance.

But despite the manor being a refuge from the world, where the boys’ backgrounds are left at the door and no one dares reveal what it is that sent them to Goodwin in the first place, petty rivalries and infighting bubble up.

It all comes to the fore when Teddy gets the grand idea to stage a show — featuring “humour, music, sword-fighting, flights of rhetoric and abandon” — for the local villagers, splitting the boys into groups and giving each a role to play in the performance.

A sense of disquiet

The overall mood of The Everlasting Sunday is reminiscent of William Golding’s Lord of the Flies in that it is very much about a group of boys left to their own devices who end up turning on each other. It’s foreboding nature and sense of disquiet are palpable.

This is helped by the language that Lukins uses and the prose style he adopts; it feels like reading an old-fashioned novel, where beautiful descriptions are paramount and the sentences are often passive (there are a lot of things “coming”, for instance, such as “appeals came for dinner”; “six o’clock came”, “music came from the radio”) and objects are anthropomorphised (“the house was no pretender of authority”, “the dining room fire was in absurd spirits”).

It’s ripe in metaphor, too: a murmuration of starlings appears to represent Goodwin’s inhabitants, moving as one, by instinct, but just avoiding disaster by the merest of margins; and the aforementioned cold symbolises the emotional distance between them all.

This is an excellent novel, one that requires careful reading. It’s a story that appears gentle and delicate on the surface but hides a dark, brutal heart beating beneath. It’s subtle and complex and ever so quietly powerful.

Lisa of ANZLitLovers liked it too.

This is my 17th book for #TBR40. The author very kindly sent it to me in early 2018 after I tweeted about wanting to buy it in Australia, where it was published (and where I was holidaying at the time), but of not having enough room in my luggage to buy another book. I don’t normally accept review copies directly from authors, but on this occasion I acquiesced because I was so desperate to read it at the time. I’m not sure why it’s taken me a year to extract it from the pile…

15 thoughts on “‘The Everlasting Sunday’ by Robert Lukins”