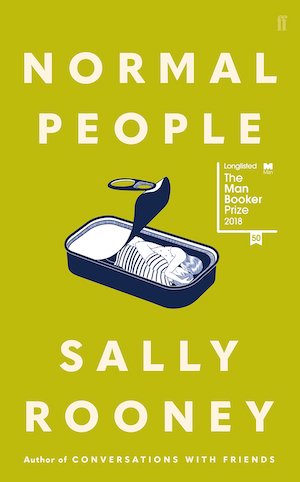 Sally Rooney’s Normal People has had so many rave reviews and won so many prizes and accolades — the latest, The Book of the Year at the British Book Awards, was bestowed last week — that I’m not sure I can add anything new to the conversation.

But what I can do is give you my reaction to this stylish novel, which is essentially an on-off romance between two people from the same Irish country town over the course of four years (2011 to 2015).

For those of you that may not yet have read the book, here’s a brief overview. Marianne and Connell both attend the same secondary school on the west coast of Ireland, but Marianne is in a different socio-economic class to Connell because Connell’s mother works as a cleaner at Marianne’s house.

The pair are different in other ways: Marianne is a loner and regarded by her classmates as a bit kooky and someone to avoid, while Connell is popular and good looking and leads a hectic social life.

But both are academically minded and good students, and this is what brings them to the attention of one another, a mutual respect for their brains and intellectual capabilities. Secretly, they become friends, then lovers, but no one knows about their relationship, which is kept hidden from fellow classmates — it’s really only Connell’s mother that twigs there’s something going on between the two of them.

The book charts the ups and downs of this unspecified relationship as the pair leave school, move from the village they’ve both grown up in and forge new lives in Dublin, where they attend Trinity, Marianne to study history and politics, Connell to study English.

Normal People is structured in an interesting way. It’s very much a narrative composed of set pieces framed around scenes — in bedrooms, in kitchens, at parties, in cars — that are essentially people talking but which give great insight into the individual character’s thoughts and behaviours and fears and hopes.

Indeed, this is a dialogue driven novel but there is not a single quotation mark in sight. It’s written it in such a way that it’s perfectly clear when people are speaking and who is doing it. (I heard Sally Rooney speak at her only London event earlier this month where she explained that using quotation marks would just add extra clutter on the page that wasn’t needed. )

Paradoxically, it’s often the things that people don’t say in this story that provides it’s edgier moments: when characters hold back from making confessions or being completely honest or not making the most of the opportunity to steer the conversation in ways that would make their lives easier but which might cause pain or embarrassment in the short term.

The narrative itself jumps forward in spurts, with each chapter heading indicating how much time has passed since the last chapter  — for instance “Four Months Later (August 2011)” and “Three Months Later” (March 2014)” — giving a sense of movement and fast pace to what is essentially a deeply nuanced and measured story. 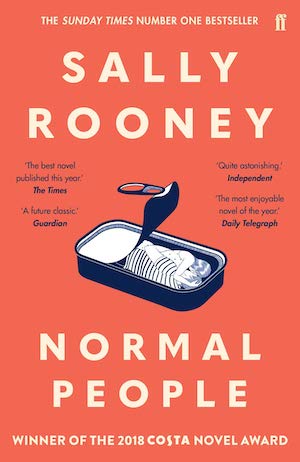 I have to admit that I thought the book dragged in places and I didn’t think there was enough tension between the characters. I wanted more action, perhaps more resolution, between Marianne and Connell. I kept waiting for something to happen, something big that would formalise their relationship or finish it. I don’t think it’s a plot spoiler to say that this doesn’t happen.

But what I did like — and it took me awhile to come to this realisation — is the ways in which Marianne and Connell’s relationship is influenced by the exterior forces of class and money, by their own sense of self-worth (or lack thereof) and desire to be “normal”, and their inherent mutual attraction regardless of circumstance or upbringing. I also liked how Rooney occasionally shows how some issues, such as domestic violence, cut across the class divide. (It wasn’t until I heard Rooney speak at the event I attended that I discovered she calls herself a Marxist; with hindsight I can very much see that influence in her work, though I would not call this book political; it’s much more subtle than that.)

Normal People is essentially a universal story about individuals finding their place in a world that is complex, one that has obstacles in place which may hinder opportunities for success, whether because of class, gender or upbringing. And yet it also shows how social mobility is (occasionally) possible, how we can influence each other for the better and find ways to seek love and happiness against the odds. It ends on a hopeful note.

That said, I still liked Conversations with Friends better.

If you are interested, this is the aforementioned event I attended at the beginning of May, which has been recorded in full by the London Review of Books, which hosted the evening in the gorgeous surrounds of St George’s Church in Bloomsbury, London.

This is my 3rd book for the 2019 Kerry Group Novel of the Year Award and my 19th for #TBR40. I bought it late last year after a member of my book group raved about it. I treated myself to the Waterstones’ exclusive hardback edition.