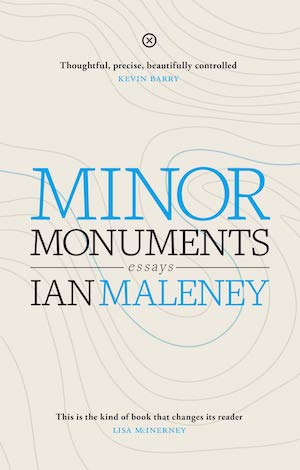 Minor Monuments is a collection of 12 elegantly written, highly personal essays by Ian Maleney, a journalist based in Dublin.

These thoughtful pieces are largely focused on the Irish Midlands, where Maleney grew up in an isolated rural farming community, and the ways in which his paternal grandfather’s Alzheimer’s disease impacted his family.

There are common themes throughout — memory, sound, loss, the meaning of “home” and our connections to place — which lends the volume a strong coherence, but it is the recurring mentions of his grandfather, John Joe, a presence that looms large in almost every essay in this collection, which provides a cumulative power that is deeply affecting.

Interestingly, Maleny studied sound engineering at university, so there is a continual focus on recording every day sounds — people talking, urban noise, crackling fires — and discovering “aural landscapes” in places where people are absent. He is interested in the idea that what we might hear isn’t necessarily what is picked up on a sound recording. Likewise, he believes it is the voice that brings a person “back to life” after they have died, perhaps because it is true and “honest”, not images of them in photographs.

I have always been more comfortable recording someone than taking their photo. To record someone’s voice, with or without permission, doesn’t really feel like stealing — it doesn’t feel like I’m taking anything from anyone, or putting anyone in a compromising position. If they know I’m doing it, I feel like they don’t act all that different, and neither do I.

Occasionally, the essays, such as “Machine learning”, about Hungarian professor John van Neumann’s research into mathematics, game theory, geometry and quantum mechanics (among other subjects), which then led him to collaborating with British mathematician Alan Turing on the philosophy of artificial intelligence, seems hugely out of place. But Maleney cleverly shows how this work is aligned with memory and the human brain, drawing links to Alzheimer’s and dementia.

I think he’s best, though, when writing about his own lived experiences, whether that be attending Seamus Heaney’s funeral (“A kind of closing cadence”) or his own grandfather’s wake (“See ye in church”). There are other essays about his grandmother succumbing to the flu (“pneumonia”), his first summer as an undergrad (“Season of migration”) and the love he has for his grandparent’s modest farm house (“Below”).

I like the way threads of an idea may reappear in later essays, giving the collection the feeling of unity and logic. Regardless, it’s clear that Maleney is a deep thinker, yet the prose, free from clutter, polished and simple, belies a mind hard at work. Yet it’s not heavy going: it feels almost effortlessly light — and there’s plenty of self-deprecating humour to soften the often sad subjects discussed here.

In essence, there’s nothing minor about Minor Monuments. I really loved it.