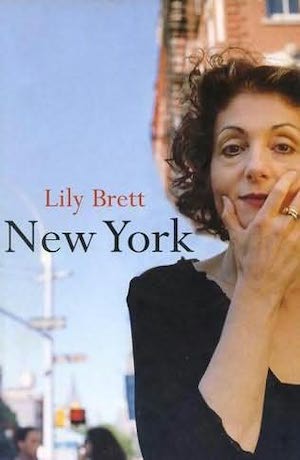 I appear to be going through a bit of a phase reading essay collections (and memoirs) of late, so when I saw Lily Brett’s New York in a second-hand store I couldn’t resist buying it.

Brett was born in Germany but grew up in Australia where her parents, both Auschwitz survivors, had fled as refugees after the war. She moved to New York in 1989 and is married to the British-born Australian artist David Rankin. She began her career as a rock journalist (she fictionalised this experience in her semi-autobiographical novel Lola Bensky, which I read last year and really loved) but is now better known as a fiction writer, essayist and poet.

This collection, published in 2001, comprises 52 short articles, no longer than three pages apiece, which are largely about what it is like to live in New York, though she does tackle other subjects as varied as dress sizes, matchmaking, motherhood and her frustration at being unable to buy non-fat yoghurt in Germany.

They are all largely honest accounts of her own insecurities, anxieties and dislikes, a bit like a collection of confessionals. Her fixation with food and her weight, her distrust of relentlessly cheerful people — “they frighten me” — and her hatred of day spas — “Spas make me tense. I’m suspicious of what they are selling” — come in for a drubbing here. But regardless of what she’s writing about, all of them feature her trademark dry, biting wit, much of it self-deprecating. Here’s but one example:

Motherhood is a thankless job. Children never remember what you did for them. What they never forget is what you failed to do.

My elder daughter has said that I never drove her to parties. All the other mothers drove their daughters, she said. My strongest memories of those years are of driving children. To parties, to ballet classes and drama lessons. Driving them to tae kwon do and piano teachers. Driving them to their friends’ houses. Driving them to school and back. I was always in the car. Driving myself crazy. (‘Children’, p69)

In another example, she confesses that while she loves New York — the shopping, the food, the curious things she sees on a daily basis — she does, occasionally, like to escape it. Yet, no sooner is she out in the countryside than she wants to go back to the city because she has next to no tolerance for greenery — “I don’t like trees that much” — and hates flying insects because every “gnat, wasp, mosquito, fly or flea that can bites me”:

Last summer, on Shelter Island, a small island two hours east of New York, I wore an insect repellent bracelet. The bracelet was supposed to ward off all insects in the vicinity for thirty hours. I was bitten after two minutes. I put on more bracelets. One around each wrist, two on each ankle and one in my hair. The bracelets looked like hospital identification tags. I looked like an escapee from a lunatic asylum. I wore the tags all summer. (‘The Country’, p12)

Yet, for all her urbanity, she struggles with modern life and is suspicious of new technology. (This collection was written pre-social media, and the internet was still in its infancy, so some pieces appear slightly dated.) Case in point:  ‘A Cellular Phone’ is uproariously funny, particularly when she mistakes birdsong for her phone buzzing and then wonders why no one is on the other end of the line. (I also laughed out loud in another piece, ‘Father’, in which she phones her elderly father in Australia and works herself into a terrible lather because he does not sound like himself and she fears he’s ill or losing his marbles, only to discover at the end of the conversation that it’s not her dad she’s talking to — she phoned the wrong number!)

I really enjoyed this collection. Brett’s prose style is clean and effortless, making for an easy read. And while the setting is mainly New York, the topics she covers are essentially universal — though her attitudes are, occasionally, a little outdated and references (there are several) to Monica Lewinsky suggest it was written at the time of President Bill Clinton’s impeachment in 1998.

That said, these breezy pieces are fun and frivolous, the kinds of articles you might expect to find in a newspaper column or weekend colour supplement. I’m now keen to explore more of her work.