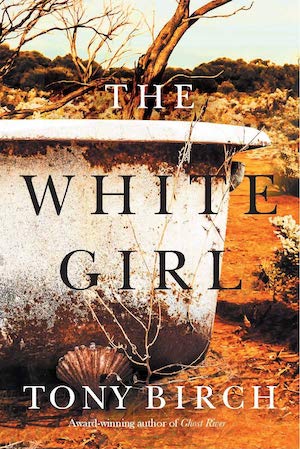 Tony Birch is an award-winning indigenous writer with several novels and a handful of short story collections to his name. The White Girl is his latest.

It’s set in the fictional rural town of Deane in an unspecified state of Australia. (The capital city is always referred to as “the capital city”, perhaps in an effort to make this story a federal / universal one.)  It’s the 1960s, the height of the Menzie’s era, when Aboriginal Australians are not regarded as citizens.

Under the 1905 Aborigines Act, their freedom of movement is curtailed and they must apply for a travel licence if they wish to leave their local area. Every Aboriginal child up to the age of 16  is under the legal guardianship of the state (represented, for instance, by the Chief Protector of Aborigines) and authorities are permitted to forcibly remove indigenous children away from their families, a devastating government policy we now refer to as the Stolen Generations.

Living under this Act is Odette Brown, whose own daughter did a runner more than a decade ago, leaving her to bring up her granddaughter Sissy single-handedly. Sissy is now on the cusp of becoming a teenager and is attracting the unwanted attention of the local hoodlums. Odette fears for her safety.

Odette also fears that the new overzealous policeman in town, Sergeant Lowe, is going to take Sissy away on the basis that she’s legally under his guardianship and is fair-skinned (therefore making her easier to adopt out to a white family). Keeping Sissy safe becomes Odette’s one abiding objective, but she finds this difficult because she’s struggling with an ongoing health issue that she’s hiding from everyone. That’s because she knows that if she is hospitalised, Sergeant Lowe will step in and remove Sissy from her care.

This story of an older Aboriginal woman doing everything she can to keep the authorities away from her granddaughter is essentially the entire basis of the plot. Will she succeed or won’t she?

I must admit that I was disappointed by this book. I had pigeon-holed Birch as a literary writer (this is the first book by him that I have read), but what I got here was commercial fiction. It’s a very linear story, told in a simple manner, and did not tell me anything I don’t already know about the Stolen Generations. Its simplicity and the easy going entertaining nature of the storytelling brought to mind Bryce Courtenay on more than one occasion.

The Australian literary critic Geordie Williamson apparently labelled the characterisation of this novel as “easy binaries”, for which Lisa of ANZLitLovers took him to task in her excellent review. I haven’t read Williamson’s review (because it is behind a paywall), so I can’t say whether his criticism is fair or not. But what I can say is that the story did feel a bit — no pun intended — black and white to me. It felt too simplified and some of the characters, especially Sergeant Lowe, too caricatured.

But I’ve come to the realisation that I am perhaps not the target audience for this book. It’s the kind of story that anyone could pick up, perhaps people who read infrequently or think books are a waste of time, and they would find it enjoyable and easy to read.

I’m not saying this is a bad thing. I actually think that it’s vital that this novel attracts as wide an audience as possible because this story, which is rooted in reality and all-too recent (and shameful) Australian history, is an important one to tell. Sue, at Whispering Gums, says it better than me in her review, claiming that “we need more novels like this [… that] are accessible, page-turning novels that have the capacity to reach a wide audience”.

So while The White Girl didn’t set my world on fire, I truly hope it’s a commercial success. The more readers who learn about the shocking ways in which Aboriginal Australians were treated by their colonial oppressors for nearly 60 years the better.

I read this book as part of ANZ LitLovers’ Indigenous Literature Week, which coincides nicely with NAIDOC Week (7-14 July) here in Australia.

25 thoughts on “‘The White Girl’ by Tony Birch”