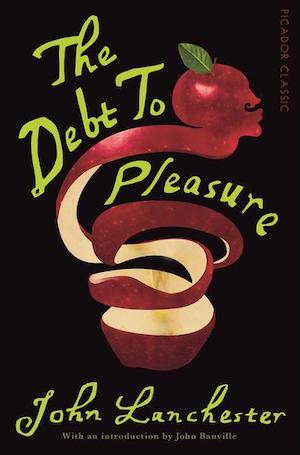 John Lanchester’s debut novel, The Debt to Pleasure, is a subversive black comedy about a narcissistic food snob who has a well-disguised penchant for murder.

The tale is narrated by Tarquin Winot stream-of-consciousness style in a voice that is both pompous and eccentric. He begins by stating “this is not a conventional cookbook” and then explains it was written while on a short holiday travelling “southwards through France, which is, as the reader will learn, my spiritual (and for a portion of the year, actual) homeland”. (For the rest of the year he lives in Norfolk.)

This lends the narrative a “serendipitous, ambulatory and yet progressive structure” as his wanderings are accompanied by his highbrow thoughts on food philosophy, provenance and gastronomy — or, as he describes it later, “gastro-historico-pyscho-autobiographico-antropico-philosophic lubrications”.

These, in turn, are intertwined with his own personal history, the second — and more popular (as we are constantly told) — son of wealthy parents (a successful businessman and a former stage actress), educated at home via a succession of private tutors (because his nature was judged “too fine grained and sensitive” to weather boarding school) and effectively raised by a kindly Irish nanny, called Mary T, whom he adored but then inexplicably seemed to frame for a personal theft.

Menus for all seasons

Structured around a series of seasonal menus — for winter, spring, summer and autumn — replete with recipes, it’s easy to feel that Tarquin’s thoughts on everything from what makes a good blini to the secret of a great croque monsieur (a “dab of mustard” apparently) are essentially harmless (and occasionally soporific), without quite realising he’s making a series of rather sinister confessions involving  family members and various servants.

His seemingly innocuous ramblings are dotted with laugh-out-loud funny lines and humorous asides, such as this sentence from a recipe for fish stew:

[…] then add six pints of what in England would be chlorinated former effluent (also known as ‘water’) and boil furiously.

And this introduction to his chapter titled “An Aïoli”:

‘It is not really an exaggeration to say that peace and happiness begin, geographically, where garlic is used in cooking.’ Thus X. Marcel Boulestin, a hero of Anglo-French culinary interaction, inexplicably omitted from ‘Larousse Gastronomique’. And which of us has not felt the truth of Boulestin’s words as we arrive in that land whose very name seems to betoken and evoke a widening of life’s sensuous possibilities, the addition of an extra few notes at either end of one’s emotional keyboard, a set of new stops on the church organ of the psyche, an expansion of every cell of one’s sensory paraphernalia, a new rapprochement between body, mind and spirit, that land which is also an idea, a medium, a mêtier, a programme, an education, a philosophy, a cuisine, a word: Provence. (On rereading that sentence I discover that, grammatically, it requires a question mark which I am, however, reluctant to supply.)

Along with his constant “mansplaining” and penchant for overly verbose sentences and often ludicrous word choices (see quote above), Tarquin’s narrative is riddled with petty jealousies mostly revolving around his older brother, a successful sculptor, whom he managed to cheat out of an inheritance. And we soon learn that the real reason for Tarquin’s holiday is not to soak up some French provincial sun, but to track down his brother’s biographer so that he can, well, let’s just say ensure that she doesn’t uncover, in the course of her research, anything that she shouldn’t…

Admittedly, I found Tarquin’s voice a little overbearing and far too conceited and arch for my liking (I could only read it in small doses), but that’s the point of the book: you’re not supposed to like this character and you’re certainly not supposed to like his deeds.

But this was a fun read — and to use a deliberately chosen pun — a rather delicious one at that!

The Debt to Pleasure won John Lanchester the Whitbread First Novel Award in 1996 and it was reissued as part of the Picador Classic imprint in 2015.

The Cook by Wayne Macauley: A deliciously dark and subversive tale about a 17-year-old young offender who becomes a trainee chef under the tutelage of a Gordon Ramsay-like figure, before branching out into his own (deadly) business as a personal chef for a rich woman and her family.

This is my 7th book for #20BooksOfSummer; and my 26th for #TBR40. I purchased it in 2015 when it was re-issued as part of the Picador Classic imprint. I attended an event at Foyles celebrating the launch of that imprint where Lanchester discussed this book, alongside John Banville whose novel The Book of Evidence was also re-issued as part of the series. Banville also wrote the introduction to Lanchester’s The Debt to Pleasure. Lanchester kindly signed his copy for me.

9 thoughts on “‘The Debt to Pleasure’ by John Lanchester”