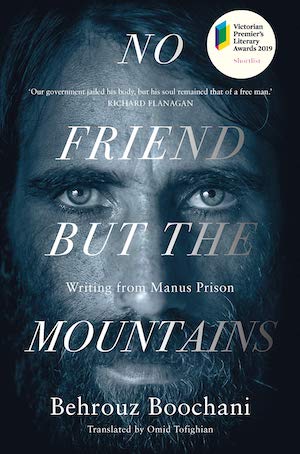 To be honest, I don’t know where to begin with “reviewing” this book. I read it more than a month ago now, and every time I sit down to try to commit my thoughts to this blog the words won’t come.

For those of you who don’t know, No Friend but the Mountains: Writing from Manus Prison is a true-life account of what it is like to be caught up in Australia’s shameful offshore immigration detention system. It was written by Behrouz Boochani, a Kurdish-Iranian writer, journalist, poet, scholar and filmmaker, who has been detained on Manus Island since 2013.

Boochani’s tale, tapped out on a mobile phone, text message by text message, and smuggled out via WhatsApp, was translated from Farsi by Omid Tofighian, and it is bookended by a foreword by Australian author Richard Flanagan, a lengthy translator’s introduction explaining how the book came into being and a similarly lengthy essay by the translator at the very end.

It first came to prominence earlier this year when it won the Victorian Prize for Literature — the single most valuable literary award in the country — and the Prize for Non-Fiction at the Victorian Premier’s Literary Awards 2019. But since then it has also won the New South Wales Premier’s Literary Award, the Australian Book Industry’s non-fiction book of the year and Australia’s National Biography Award.

Ironically, Boochani has not been able to accept any of those awards in person. Although the Manus Island detention centre closed in 2017, he has remained on the island since then — effectively stateless.

The memoir — which Tofighian describes as “literary experimentation” and a “collaborative effort between author, translator, consultants and confidants” — reads very much like an adventure tale to begin with, before morphing into an almost Kafa-esque depiction of prison life.

It charts how Boochani decided to flee Iran when the offices of Werya, the Kurdish magazine he co-founded and produced, was raided by the Iranian Revolutionary Guard, which arrested 11 of his colleagues. Fortunately, he was not in the office that day. In fact, he never went back. Instead, he went into hiding and eventually made his way to Indonesia, with a view to making a perilous ocean crossing to seek asylum in Australia.

But things did not go as planned. The Indonesian boat he was on, overcrowded with some 60 asylum seekers, was intercepted by the Australian Navy.  Everyone on board was taken to Christmas Island.

Early in the morning, at six, guards came in like debt collectors and heaved us out of bed. Within a few minutes they took us to a tightly confined cage. It is now almost two hours since they brought us here. These hours have been really tough. It is hard being imprisoned…being locked in a cage. We have now been in prison on Christmas Island for a whole month. It is hard being a prisoner.

From there, Boochani was moved to the Manus Island Regional Processing Centre, a detention centre in Papua New Guinea operated by the Australian Government. He was stripped of his name and, like every other prisoner, became known as a number only.

The rest of the book is a mix of eloquent, heart-felt poetry (as per the quote above), bitter diatribes about his predicament and observational stories about fellow prisoners and guards told with amazing psychological insight. It’s an almost soporific account of day-to-day life on Manus and what happens — or doesn’t happen — on those endlessly long, supernaturally hot days in detention.

It brims with a slow-burning anger but it is also filled with perplexity and confusion, for how could a country, so highly regarded, so wealthy and free, treat innocent people in such a cruel, dehumanising way?

Boochani’s story is littered with suicides (much sought-after razor blades being the instrument of choice) and horrendous examples of already traumatised men, many fleeing persecution and certain death at the hands of authorities in their respective homelands, now enduring further mental anguish.

His account is a valuable insight into what happens to men, cut off from family and vital support networks, when they are subjected to inhumane treatment. He depicts the infighting, the emotional outbursts, the acts of moral cowardice, the riots, the hunger strikes, the way that certain people cling to their traditions and cultures when everything around them is foreign and frightening.

And he writes about his own inner turmoil, his desire to be alone, to not build allegiances with anyone, to quietly observe — and secretly document — all that he sees around him.

There’s no doubting that No Friend but the Mountains: Writing from Manus Prison is an extraordinary achievement. The contents are compelling and confronting, as is the story behind its creation.

Reading it is to become almost immune to the shock of all that Boochani endures. I suspect his writing, not only of this book but the many articles he has penned for the Guardian, the Sydney Morning Herald, The Financial Times et al while being imprisoned, has given him the creative outlet he needs to preserve his sanity — and his hope. He is a very cerebral person and a deep thinker.

It’s the kind of book that induces anger and shame in the reader. But it’s the sheer injustice of this system and the total lack of empathy and compassion towards our fellow humans that leaves me feeling most perplexed. I cannot comprehend it. Nor can I comprehend the waste — of time, of energy, of productive human lives — to maintain a policy that is so hostile and destructive.

Sadly, the people who need to read No Friend but the Mountains most — those that think asylum seekers should go back to where they come from, the policymakers, government officials and contractors that prop up this system — won’t read it. But if you’re an Australian, I almost think it’s your duty to do so, if only to know what is being done in your name.

For another take on this book, please see Bill’s review at The Australian Legend.

This half-hour documentary (above) is a moving account of how Boochani wrote the book and smuggled it out.

This is my 13th book for #20BooksOfSummer. I bought it on Kindle after it won the Victorian Prize for Literature, but the copy I actually read was borrowed from Fremantle Library.

15 thoughts on “‘No Friend but the Mountains: Writing from Manus Prison’ by Behrouz Boochani”