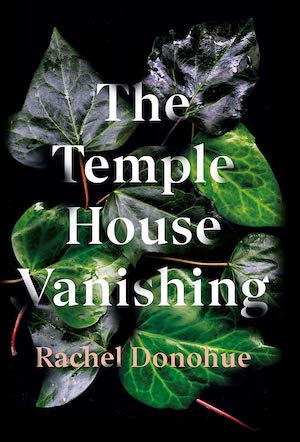 I’m quite partial to an atmospheric read, particularly if it is set in a boarding school and written by an Irish writer, and Rachel Donohue’s debut novel, The Temple House Vanishing, ticks all those boxes. Throw in an intriguing cast of characters and a mystery to solve and I couldn’t be happier. I raced through this book in a matter of days.

I liked a lot of things about this novel, including:

The timeless nature of the story — by which I mean it could be set at almost any point in the past 300 years. The narrative swings backward and forwards between the present day and the early 1990s as a journalist investigates the disappearance of Louisa, a 16-year-old schoolgirl, and Mr Lavelle, her charismatic art teacher, from an exclusive Irish boarding school 25 years earlier. And while the present-day feels like the present day, the time shift feels almost Victorian. I think that’s because it’s set largely in a Victorian Gothic boarding school, but there’s something about the atmosphere that Donohue evokes that makes it feel like a period drama.

The creepy, Gothic nature of the tale and the sense of disquiet that slowly envelopes you as you read on. This would be an absolutely perfect fireside read or for those times when you’re holed up in a holiday cottage and it’s pelting with rain outside. I read it in scorching heat on an outdoor balcony and it still gave me the chills! I think it’s because the characters are so well drawn — all arch and highbrow and pretentious and full of adolescent broodiness — and they’re playing a dangerous game that is beyond their ken. They’re typical teenagers who think they know it all, but they’re too naive to fully understand the consequences of their actions. And the setting — an elite Catholic boarding school for girls who are taught by nuns — lends a claustrophobic, almost Picnic at Hanging Rock edge to it.

The mystery at its heart. Trying to figure out what happened is what kept me turning the pages. And the structure of the novel, which swings between past and present in alternate chapters, gives an added sense of intrigue as the journalist — who has a childhood connection to the missing girl — discovers clues and makes connections as part of her investigation.

The notion that it’s almost impossible to tell who is telling the truth and who is not. This made me constantly question the reliability of Louisa, the first-person narrator at the boarding school, and the people around her, including her beautiful friend Victoria and the bohemian Mr Lavelle!

Of course, it’s not a perfect novel and I sometimes felt one step removed from the story because Louisa tells her version of events in quite a cold, detached manner. That adds to the creepy nature of The Temple House Vanishing, but it also means it’s difficult to emotionally engage with her.

And sometimes it feels a little heavy-handed in terms of the points Donohue is making about the differences in the class system (Louisa is from a working-class background and earns her place at the school via a scholarship).

But on the whole, these are minor issues. I thoroughly enjoyed this haunting tale that brims with cruelty and mystery and has a sinister undercurrent running throughout.

The Temple House Vanishing will be published in the UK on 20 February and in Australia on 3 March.

The Everlasting Sunday by Robert Lukins: Atmospheric tale set in a boys’ reform school during the UK’s “big freeze” of 1962-63.

One thought on “‘The Temple House Vanishing’ by Rachel Donohue”