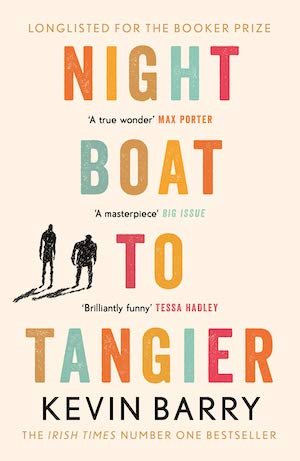 What a darkly fun and intriguing book this turned out to be!

Night Boat to Tangier by Kevin Barry defies description. It’s not strictly a black comedy, though it’s packed with small, comic moments. And it’s not strictly a crime novel, because it doesn’t revolve around a particular crime that needs to be solved, but it does star two bad men out to get what they can through nefarious means. I guess it’s a blend of both, with a ribbon of pathos and melancholy running through it.

It brought to mind all the surrealness of Samuel Beckett’s play Waiting for Godot and the mournful Spanish ex-pat bits of Colm Toibin’s novel The South.

So what’s it about, I hear you ask? Essentially it’s about two Irish gangsters, Charlie Redmond and Maurice (Moss) Hearne, and the ups and downs they have weathered over the years as drug dealers with operations in Cork and Spain.

When the book opens the pair — “in their low fifties, the years are rolling out like a tide now” — are at the Spanish port of Algeciras waiting for the night boat from Tangier (hence the book’s title). They don’t plan to get on the boat, they are waiting for someone to get off it. That someone happens to be Maurice’s 23-year-old daughter, Dilly, who has been missing for three years.

Oh, and this is as awful a place as you could muster — you’d want the eyes sideways in your head.
The ferry terminal has a haunted air, a sinister feeling. It reeks of tired bodies, and dread.
There are scraps of frayed posters — the missing.
There are customs announcements  — the narcotraficante.

As the pair wait, they interrogate other people coming off the boat, wanting to know if they might have seen Dilly. One of the unsuspecting people they confront is Benny, a young British man with dreadlocks and a dog on a rope, the kind of person they believe Dilly, who also has dreadlocks, would hang out with.

She’s a small girl, Benny. She’s a pretty girl. And you see what it is? Is we’ve been told she’s headed for Tangier.
Or possibly she’s coming back from Tangier.
On the 23rd of the month. Whichever fucken direction? It’s all going off on the 23rd.
Is what we’ve been informed by a young man in Málaga.
On account of the young man found himself in an informational kind of mood.

The pair don’t have much luck finding anyone who knows Dilly, but that doesn’t stop them waiting — and intimidating anyone they think might have some information that could help them locate her.

But that’s not all there is to the story.

Barry does something rather clever with Night Boat to Tangier because he fleshes out the backstories of both men in alternate chapters. This allows us to find out how the pair developed their “business” and all the shenanigans they have carried out since the late 1990s, the women they have had relationships with and the deals they have done both home and abroad.

It also allows us to come to know these men, so they become less caricature — the hard men with attitude and dry wit — and more “real”. Barry does this so well that even against our better judgment we empathise with them instead of condemning them because they appear to be all-too-human, with flaws and foibles we can understand.

What I liked about this novel was its structure switching between the current day at the port of Algeciras and the flashbacks that fill in the gaps between now and the 1990s.

I also liked the linguistic changes between these chapters, so that the sections at the port are written staccato style, mainly in dialogue, with many funny one-liners and a hint of menace, while the flashback chapters are written in a more “traditional” third-person style to give a more rounded overview of the men and their lives.

It’s a well-crafted audacious novel, written in cracking prose, one that marries black comedy with an almost mournful undertone. Night Boat to Tangier was longlisted for last year’s Booker Prize and was shortlisted for the Irish Book Awards Novel of the Year 2019. And it may just well make my Top 10 at the end of this year.

This is my 14th book for #TBR2020 in which I plan to read 20 books from my TBR between 1 January and 30 June. This is another book I requested from NetGalley when it first came out. I read about 3% and then abandoned it because I wasn’t in the mood for it at the time. Fast forward more than a year later and I was more than ready for some Irish gangster capers. LOL.

11 thoughts on “‘Night Boat to Tangier’ by Kevin Barry”