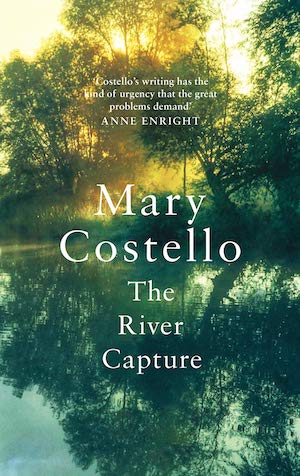 Mary Costello’s The River Capture is a gently moving novel about a lonely young man who falls in love before it morphs into something else entirely: a stream of consciousness-like tale that mirrors the man’s descent into a short-lived madness.

A book of two halves

When the book opens we meet Luke O’Brien, an English teacher with specialist knowledge of James Joyce and his masterpiece Ulysses.

He has taken a leave of absence to work on a book about his favourite topic but this has been extended beyond the planned year following the death of his beloved mother. Now, living alone on the family farm, which is situated on a bend in the River Sullane in Co. Cork, he spends much of his time reading, walking the farm, ruminating about his family’s past (a string of tragic deaths in the 1940s that had long-lasting repercussions) and running errands for his elderly Aunt Ellen who lives nearby.

One day his quiet existence is disrupted with the arrival of a woman called Ruth, who has her uncle’s dog in her car. “He’s gone into a nursing home,” she explains. “I have to go back to Dublin and I can’t take him [the dog] with me.”

“I’m sorry for barging in on you like this,” she says. “They told me in SuperValu that you might want a dog. I was going to put up a notice and the woman at the till said you might be interested.”

Luke, who has a “bleeding heart for animals”, takes in the dog, partly because he is instantly attracted to Ruth. Their relationship plays out over the course of a few weeks, tentative at first because Ruth is wary of Luke’s almost immediate confession that he has had relationships with both men and women in the past (“I like to think of myself as just… sexual, not bisexual or straight or gay or any other label”), but before long the relationship becomes serious.

A demand to end the romance

Luke introduces Ruth to his Aunt Ellen, who is initially delighted that her nephew has found a companion because she truly wants him to be happy. But the day after the meeting Ellen orders an end to the relationship — “She’s bad news, Luke. Give her up.”

This demand throws Luke into a desperate tailspin. His devotion and loyalty to his aunt, and, in turn, the family name, supersedes his own happiness. (Note that I haven’t revealed Ellen’s reasoning because I don’t wish to spoil the plot.)

He breaks it off with Ruth via email and then spends an evening getting exceedingly drunk on Tempranillo and whiskey, descending into a single night of madness in which he cross-examines himself in a kind of parody of “Ithaca”, the penultimate chapter of James Joyce’s Ulysses.

To what does he now turn his attention?
To the copy of Ulysses propped open (at pages 776 and 777) on the bookstand.

What does the sight of Ulysses, or the mere thought of it, always provoke in him?
Evocations of home. Metaphorical home, repose of the soul. A longing for Bloom, for filial love, fellow feeling.

Has he read the novel, in consecutive pages, up to this point?
He has circled back and forth in a haphazard but sometimes chronological pattern. Since his first reading (haphazardly) in the second term of First Year English at UCD in 1997, during which he failed to complete the Cyclops, Oxers of the Sun and Circe episodes, he has, on many occasions, read random episodes in their entirety and certain (favoured) episodes repeatedly, chronologically, obsessively (Emmau, Ithaca and Penelope).

Not a book to rush through

The River Capture is the kind of book you really need to be in the mood for; it requires patience and a slow reading to get the most out of it. It is not a book to rush through. It is filled with metaphors and recurring themes — when the soul begins, how water moves, the restrictive nature of labels, and the influence of sexually transmitted diseases on the creative process  — and is particularly focused on love and loyalty.

There are, as you might expect, many references to Joyce and Ulysses, but I don’t think you necessarily have to know much about either to enjoy the book. I have read Ulysses so some of the references — lines and scenes and characters from the book — resonated, particularly the following line:

Why does Bloom, at thirty-eight, seem so old — old enough for Stephen to pronounce him ‘a profound ancient male’?

That’s because when I began reading The River Capture I was under the illusion that Luke was in his 50s only to discover he was 34 and just living the life of an older man.

But equally, much of the book has no direct link to Ulysses, not least the idea of the “river capture”, a geological process by which one river captures the flow of another river or drainage system. This thwarting of one stream of water could be seen to be a metaphor for Luke’s life when Ellen demands that he give up a fledgling romance, forcing him to follow a different path, as it were.

Ultimately, as much as I admired The River Capture it didn’t quite live up to my love of  Costello’s debut novel Academy Street, published in 2014, which one of the best novels I have EVER read. I hold her short story collection, The China Factory, in similar high regard. I would recommend either of those as good introductions to her work.

This is my 4th book for the 2020 Kerry Group Novel of the Year Award and my 17th book for #TBR2020 in which I plan to read 20 books from my TBR between 1 January and 30 June. I bought this book when it was first published in Australia last October (the receipt tucked inside reveals that the actual date of purchase was 22 October) but kept putting off reading it because I was worried it wouldn’t live up to my high expectation…

13 thoughts on “‘The River Capture’ by Mary Costello”