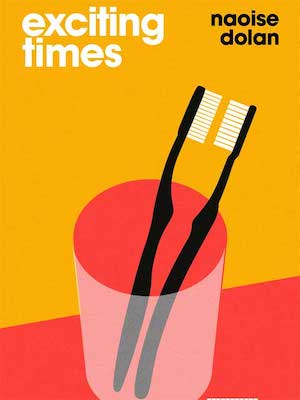 Naoise Dolan’s Exciting Times has been compared with Salley Rooney’s Normal People. And I guess if you are looking for something of a similar ilk — a story about an Irish Millenial finding her feet in the adult world, getting enmeshed in a messy love life and negotiating complicated friendships  — then the comparison holds.

Set in Hong Kong, it charts a year in the life of 22-year-old Ava who flees Ireland to take up a poorly paid job as a TEFL teacher. She’s not expecting big things; she just wants to spread her wings, get over the unexplained sadness she felt in Dublin and perhaps make some money that doesn’t involve being a waitress.

In Hong Kong, she begins having regular lunch catch-ups with Julian, a posh English guy, who’s a lot older than her and works in banking. They have nothing in common, but Ava is desperate for easy company — she’s exchanging “little more than hellos and goodnights” with her two flatmates in the Airbnb she’s sharing and makes little effort to socialise with others at work — but Julian listens to her and they have great conversations.

Before long, she is spending several nights a week at Julian’s upmarket flat.

‘I’m glad we’re friends,’ he’d say, and far be it for me to correct a Balliol man. I felt spending time with him would make me smarter, or would at least prepare me to talk about currencies and indices with the serious people I would encounter in the course of adult life. We got on well. I enjoyed his money and he enjoyed how easily impressed I was by it.

Their relationship eventually morphs into a sexual, no-strings-attached one, but it’s hard to know who is using who. Julian will spend lavish amounts of money on Ava. He buys her gifts and meals out and lets her move into his guest room rent-free. But he doesn’t want to make a commitment, he just likes the sex and having her there to look after his flat when he’s away on business.

And Ava, who likes to think of herself as independent, sees no issue in being supported by a man she barely knows, using his credit card behind his back and inveigling her way into his friendship circle even though she doesn’t particularly like any of his friends and is hugely critical of their accents, their attitudes, the clothes they wear and even their hairstyles.

But Ava, who describes herself as “lacking warmth”, does develop feelings for Julian, and becomes frustrated when they are not returned in kind. It’s only when she meets Edith, a Hong Kong local educated in England, that Ava feels the ground shifting beneath her feet, for Edith, who works in an upmarket law firm, is cultured and sophisticated and successful. She has all the attributes that Ava admires and is desperate to acquire. The pair begin dating and, for the first time, Ava finds her feelings being reciprocated…

There’s not much of a plot other than the unfolding of Ava’s relationships and the ways in which she manipulates, or is being manipulated by, others. She’s constantly “stalking” her lovers, checking up on their activities on social media, trying to gauge whether they are committed to her or not, and often over-analysing their texts and emails.

At times her behaviour shows her nativity and inexperience in both intimate and work relationships. She’s forever trying to fit in, but at the same time she’s cultivating a persona of detachment and this leads to her feeling alienated, of never been able to mix comfortably with the people she works or socialises with. (Apparently, Dolan is autistic, which makes me wonder whether Ava is, too.)

I was quieter and more openly begrudging now, and it was becoming clearer than ever that the other teachers found me odd. I’d encountered this opinion so many times, in so many places, that I’d come to find it comforting. It doesn’t matter if a fact is good or bad, I thought. You don’t mind once everyone agrees. Their consensus makes it true, and truth feels safe.

And yet Ava, for all her self-involvement, has a whip-smart intelligence. She has strong feelings about social and political issues, understands the class system and the ways in which it works against her, is “woke” about racism and sexism and homophobia — and is not afraid to speak her mind. And yet there’s a hypocrisy at play here because while she will rail against capitalism and the disparity between rich and poor, she sees nothing wrong in living off Julian’s money and of lusting after nice things she can buy to impress Edith.

Exciting Times is written in a deadpan prose style and moves along at a clip, but the characters are well rounded, feel flesh and blood real, and the dialogue is witty and snappy and believable.

It has the illusion of navel-gazing, but there’s a lot going on here that is conveyed by the things people don’t say, the misunderstandings that occur, the mood that is evoked. Dolan does an especially nice line in banter.

While I admit I am probably not the target audience for this kind of novel, I enjoyed it. It’s quick and simple to read, but the characters have remained with me and it reminded me of what it’s like to be in your early 20s, not quite knowing who you are, let alone how you fit into the grand scheme of things.