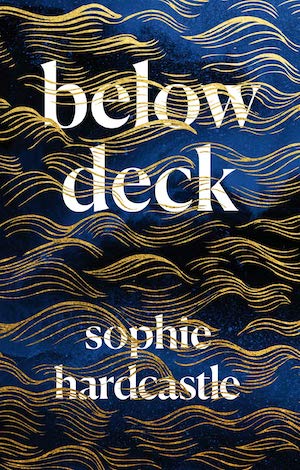 If any book was going to slot into the #MeToo genre of novel, Sophie Hardcastle’s Below Deck would be right in there.

This simple yet moving story of a young woman coming to terms with a sexual assault that happened in her past should probably come with a trigger warning. And while the assault is just one aspect of this story, it comes like a sucker punch to the stomach and its aftermath informs everything that follows.

But this is not a heavy tale. Hardcastle writes with a lightness of touch. She sandwiches the traumatic event with more light-hearted aspects so you never feel too weighted down by it.

The story follows 20-something Olivia — Oli — who is estranged from her parents and lives with her grieving (and grumpy) grandfather while she goes to university. She has a boyfriend, whose controlling behaviour foreshadows her future relationships with men — he doesn’t think she should accept the offer of a postgraduate internship with a prestigious investment bank, for instance, because that would make her more successful than him — but when she finds herself “kidnapped” on a boat her life takes a different turn.

The “kidnapper” is, in fact, a lovely older man called Mac, who loves to go sailing, and his partner is Maggie, a blind woman with synaesthesia — “It’s where you see colours when you think of or hear sounds, words, numbers — even time” — with whom she develops a fond friendship. Oli, too, has synaesthesia, processing her world and her feelings via colour. Maggie, for instance, is “velvet lilac”, Wednesdays are “blood orange”, two is “red” and nine “dark pink”.

Islands come into focus the way you wake up on a Sunday morning: slowly, like a painting, layer by layer. Block blue, at first. Then daubs of green, the outlines of trees, a band of white sand. A brown slab takes shape, all wrinkled and folded rock, until the cliff face opens its eyes.

It is the guiding light of this older couple that gives Oli her new-found strength to escape her controlling boyfriend, to come to terms with the sudden and unexpected death of her grandfather and to seek new adventures. She reinvents herself as a sailor, but it is a fateful trip several years later that puts her in danger. She sets sail with an all-male crew from Noumea to New Zealand and finds herself the subject of unwanted sexual attention.

Several years later, now a curator at an art gallery in London, Oli falls for a man who is perfect for her. He’s gentle, kind and devoted, but her past keeps holding her back.

Without wishing to sound dismissive, I think I am probably too old for Below Deck to truly resonate, but I imagine if you’re a young woman this story would have a lot to say. It’s about misogyny and standing up for yourself, of finding your own voice, of learning to trust people, of making better life choices and dealing with past traumas so that you can move on.

Hardcastle deals with the issue of sexual assault with delicacy. The actual scene — “rape is the deepest red I have ever seen” — is deftly written, skirting over descriptions of the physical act, focussing instead on the ways in which Oli chooses to survive the assault, the voice that screams in her head, the emotions she goes through along the way. It is haunting and claustrophobic and harrowing.

But sometimes the narrative feels forced and lacks detail, jumping ahead too quickly. And yet when Hardcastle does focus on detail her writing really sings, especially when she focuses on the sea.

She enters the sea the way you come home, dropping your keys on the table, breathing out. A sigh of relief, the way the ocean holds her.

She has a particular penchant for similies. A gaze, for instance, drifts “across my skin like clouds across the sky”; waves lap at the shore “like gentle kisses in the middle of the night”; where cold weather is all-consuming “like falling in love. Total and unapologetic”.

Below Deck is an ambitious novel about an emotional reckoning, the beauty and language and colours of the sea, and about a young woman trying to navigate parts of her history she would rather forget. It won’t be for everyone — what book is? — but it will appeal to those looking for a quick-paced read with an emotional depth.

This is my 9th book for #AWW2020 and my 1st novel for #20BooksofSummer / #20BooksOfSouthernHemisphereWinter. I bought it earlier in the year, partly attracted to the cover I have to admit.

7 thoughts on “‘Below Deck’ by Sophie Hardcastle”