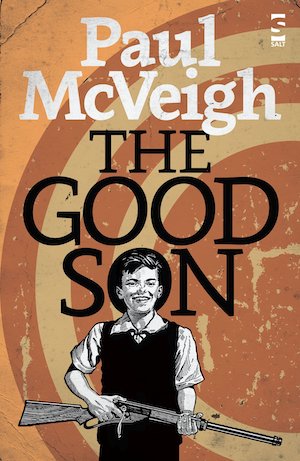 Paul McVeigh’s The Good Son is a coming-of-age story set in the Catholic working-class and Irish Republican district of Ardoyne, in Belfast, Northern Ireland, during The Troubles.

It is narrated by a schoolboy, Mickey Donnelly, who’s a smart kid with big dreams — when he grows up he wants to move to America.

I can’t wait to get to America. I’m going to work in a diner. I’ve got dreams.

But life is tough for Mickey, the apple of his mother’s eye, because his one shot at going to St Malachy’s, the local grammar school, has just been blown: his father has spent the required funds on alcohol and gambling.

The book follows nine weeks in Mickey’s life during the long school summer holidays in which he dreads having to go to St Gabriel’s, where’s his older brother Paddy is in the sixth form and where all the boys are horrible and there will be no dancing or singing or acting lessons.

Caught between childhood and puberty, Mickey longs for his voice to drop so he can be regarded as a man rather than being labelled “gay” and “weird” by other children, including Paddy. It doesn’t help his reputation that he mainly hangs out with his little sister, Wee Maggie, whom he dotes on, and her friends instead of other boys (with the exception of Fartin’ Martin, a boy from school) and speaks in a “posh” way, using good manners which mark him out as different to other boys his age.

During his holidays he mainly plays with his pet dog Killer, lusts after his neighbour Martine, who encourages him to teach her to “lumber” (slang for sex) and has occasional run-ins with local bad girl Briege, whose father is in prison — rumour has it, he stole some sausages for the IRA.

Mickey runs a lot of errands for his mother, whom he loves dearly. She becomes increasingly dependent on him to be her “good son” when Mickey’s dad leaves, taking the TV with him, but this proves a challenge when his freedom is constantly curtailed.

I have very clear instructions. Don’t go to the top of the street cuz there’s always riots. Don’t go to the bottom of the street cuz there’s No Man’s Land and there’s always riots. Don’t go near the Bray or the Bone hills cuz that leads to Proddy Oldpark where they throw stones across the road from their side. Don’t go into the aul houses cuz a wee boy fell through the stairs in one and broke his two legs. I think his neck too. Ma could be exaggerating. Oh, and don’t go onto the Eggy field cuz there’s glue-sniffers. Ma should have just tied me to the gate or locked me in a cupboard.

On one occasion, when he ventures to a part of town he is forbidden to visit, he gets caught up in a bomb explosion that kills his dog and injures his own head, though not seriously. He hides this fact from his mother, worried that he will get in trouble, and does not tell her that he saw Paddy, who may or may not be involved with the IRA, at the scene.

It’s this kind of careful balancing between comedy and melodrama that gives The Good Son its emotional power. It’s the kind of book in which the reader laughs out loud on one page, then turns over to be confronted by the stark reality of what it is like to be a child in a war zone.

I check there’s no Prods or gangs about in Alliance Avenue and cross to the corrugated iron barricades. There’s a tiny little door to the Prods. You’re not allowed to use it. You’d be murdered. They’ve started callin’ them peace lines which really makes me laugh cuz actually this is where people come to kill each other.

As the story inches towards the end of the school holidays, the drama slowly builds as Mickey’s family get caught up in events that put them at risk, forcing the “good son” to do something bad to protect them all. It’s a deftly told tale, compelling and charming in equal measure, but also alarming and heart-rending too.

The Good Son won the Polari First Book Prize in 2016.

Cathy, who blogs at 746 books, liked this novel a lot too.

‘Shadows on our Skin’ by Jennifer Johnston: another coming-of-age story set during The Troubles. It follows a Derry schoolboy, surrounded by violence and danger, who develops a platonic relationship with a female teacher and then discovers his world opening up…

This is my 12th book for #20BooksofSummer / #20BooksOfSouthernHemisphereWinter. I purchased it on 30 August 2017, I think because I had seen a good review of it on Savidge Reads, back in the day when Simon blogged.

7 thoughts on “‘The Good Son’ by Paul McVeigh”