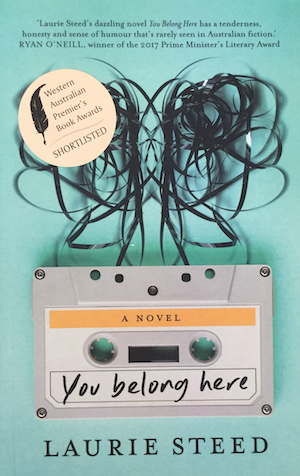 Laurie Steed’s You Belong Here has been described as the kind of book Anne Tyler might write if she was Australian — and I think that’s a fair summation.

This domestic driven drama charts what happens to the Slater family over the course of more than 40 years. It tells us how Jen and Steven meet as teenagers in Melbourne, how they marry young, move to Perth and begin a family. It then charts how the marriage disintegrates and then looks at the long-lasting impact the divorce has on the three children — Alex, Emily and Jay — who struggle with various psychological issues long into adulthood.

It’s a masterful account of family relationships, of the ways in which we struggle to navigate the world and the importance of love and stability to our mental well-being.

Steed does not get bogged down in details; he takes a particular episode, for example, how Steven loses his job as an air-traffic controller or how Jay’s mental health deteriorates to the point where he needs to be admitted to a psychiatric facility, and tells it from the point-of-view of a particular character. He fleshes it out so we see how that snapshot in time illuminates what else is happening within and outwith the family.

Little details, like a song or a fashion item or a brand of food, pegs the episode to a specific time in history, so you get the feeling as you move through the story that you are also moving through time, from the 1970s to the 2000s. It’s an effective literary device.

On the face of it, You Belong Here might sound like a depressing read — and in parts, it is pretty miserable — but on the whole, this compelling story is written with warmth and humour. It feels realistic and, indeed, normal. There are families everywhere who confront and deal with the same kind of issues — family breakdown, single parenthood and mental health, just to name a few — that the Slaters go through.

It’s tightly written — it has to be given that Steed covers 40-plus years of one family in just 250 pages — so the focus is razor-sharp and insightful, with not a word wasted. He’s very good at drilling right down to the heart of the matter, the ways in which humans fool themselves or pretend everything’s okay because it’s easier not to confront the truth.

For all their arguments and misunderstandings, their troubles and heartaches, I did enjoy spending time with this dysfunctional family.

For another take on this novel, please see Sue’s review at Whispering Gums.

The author is based in Perth, so I read this book as part of my #FocusOnWesternAustralianWriters. You can find out more about this reading project here and see what books I’ve reviewed from this part of the world on my Focus on Western Australian Writers page.

6 thoughts on “‘You Belong Here’ by Laurie Steed”