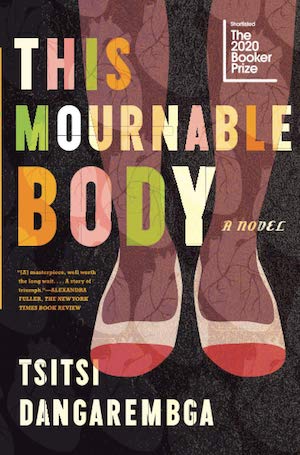 Shortlisted for this year’s Booker Prize, Tsitsi Dangarembga’s This Mournable Body is one of the most powerful pieces of fiction I’ve read in a long time.

It’s a challenging read, in all kinds of ways, not least because of the unfamiliar (to me) African setting and cultural references, the second-person point-of-view and the author’s tendency to skip over detail so that I often had to reread passages to interpret what was happening.

But its POWER comes from the way in which it made me see the world from a completely different perspective as I walked in the shoes of the main character, Tambudzai, a woman from Zimbabwe who has fallen on hard times. Tambudzai’s struggle to keep going, to get herself back on track, despite the direst of circumstances, is deeply affecting, so much so that when I finished this book it left me in a deep funk for days afterwards.

When the book opens Tambudzai is living in a run-down youth hostel in downtown Harare. She’s quit her successful mid-level job in an advertising agency in protest against her white colleagues taking her ideas and presenting them as their own. It’s a decision that shows Tambudzai’s strength of character, but it has terrible repercussions, for now, without a regular income, her living arrangements have become precarious.

The novel traces Tambudzai’s various attempts to improve her situation. When she gets a job as a teacher she takes a room in a widow’s house, but even then the money is tight and she must scrimp and save — and even steal edible plants from the widow’s garden to survive. Later, when she is fired from her job — not unreasonably, it has to be said — Tambudzai must pull herself up again.

A chance encounter with her former boss from the advertising agency she fled leads to a job for a travel start-up company. It’s the perfect opportunity to start afresh, to make a good impression and to advance her career.

In the beginning, she does exactly that, but Tambudzai’s success is limited by her inability to be anything other than herself, for a younger colleague with more get up and go, more energy and more willingness to manipulate things for her own ends, effectively leapfrogs Tambudzai’s standing in the company. It’s heartbreaking to see such a resilient, fiercely independent woman being overshadowed in this way.

This Mournable Body is the final part of a trilogy — following on from Nervous Conditions and The Book of Not — but it works as a standalone. That said, I’m sure Tambudzai’s story might resonate even more if you have read the previous instalments.

Even so, it is clear from this novel alone that Tambudzai is a complicated, complex character, someone whose family expected big things of her. She’s well educated, having fled her small village to become the first in her family to get a degree, but she struggles with her mental health and has no reliable support network — no friends, no family, no colleagues — to help her.

A series of poor decisions and an inability to get herself out of a cycle of “boom” and “bust” means she never achieves the success she feels she deserves. It’s almost as though she can’t quite tap into her full potential and can’t rise above the issues — personal and otherwise — that hold her back.

When she eventually goes back to her home village to run tours for the travel company, it’s not the recipe for success for which she might have dreamed. She’s effectively selling her own people’s poverty as a tourist gimmick and the role she plays in this is just that — a role, one which she finds increasingly more difficult to play.

This novel is a searing indictment of cultural imperialism, structural racism and gender inequality in 1990s Zimbabwe. I’ve not been so incensed by the thwarted potential of a fictional character since I read Thomas Hardy’s Jude the Obscure more than 30 years ago. Expect to see This Mournable Body in my books of the year list come December.

21 thoughts on “‘This Mournable Body’ by Tsitsi Dangarembga”