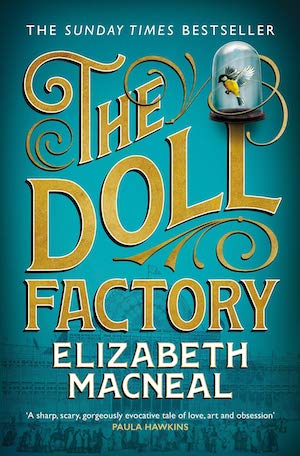 Art, freedom and obsession collide in Elizabeth MacNeal’s The Doll Factory. This debut novel marries historical fiction with elements of the psychological thriller to create a proper page-turner. I practically devoured this book on a seven-hour train journey (from Kalgoorlie to Perth) last weekend and have been thinking about it ever since.

It’s set in London during the Great Exhibition and the era of the Pre-Raphaelite Brotherhood (PRB), a loose association of English painters who rebelled against the art standards of the day (read more about them here), and focuses on a young woman called Iris Whittle who is drawn into their circle, first as an artist’s model, but then as a burgeoning painter in her own right.

Along the way, she attracts the unwanted attention of a taxidermist, Silas Reed, who is constantly in pursuit of the weird and wonderful. Silas becomes obsessed with Iris and her deformity — a collarbone that is twisted out of shape so that she has a slight stoop to her left side — and makes plans to befriend her, whether she likes it or not.

What results is a fast-paced story in which Iris, oblivious to Silas’s increasingly dangerous obsession with her, falls prey to his dark, manipulative ways…

When we first meet independently minded Iris she is working (and living) in a doll factory (hence the book’s title) alongside her twin sister Rose, painting faces onto dozens of porcelain dolls every day.

The long 12-hour shifts are monotonous and dull. Iris dreams of doing something more interesting with her life. She has a talent for painting and longs to pursue this, but, of course, conventions of the day generally restrict women from leading lives that are anything other than domestic.

A chance encounter with a member of the PRB, attracted to her flame-red hair and quiet beauty, offers her a means of escape. In exchange for becoming an artist’s model, she will be given art lessons to explore her talent.

But what seems like a no-brainer is fraught with pitfalls, for to do so she will earn the wrath of society (to be an artist’s model at the time was akin to being a whore) and her family will disown her.

There are further complications because Iris has no idea that a man she accidentally bumped into at Hyde Park a few weeks earlier has developed a “thing” for her. Silas Reed’s quiet pursuit of her goes relatively unnoticed. She ignores his later invite to visit his shop (“Silas Reed’s Shop of Curiosities Antique and New”) and is unaware that the Great Exhibition ticket that arrives in the post is an anonymous gift from him.

Being oblivious to these “signs” only puts Iris in more danger for she is unable to take steps to protect herself — with far-reaching consequences.

There are echoes of John Fowles’ The Collector here (a book I read so long ago that my memory of it is quite vague), but for all its creepiness and, at times, morbid atmosphere, this isn’t a psychological thriller as such.

The Doll Factory is primarily a well researched historical novel, incredibly evocative and rich in detail, which brings the sights and smells of 1850s London to life on the page.

It’s very much a novel about art and pursuing dreams and having the freedom to live life as you want to live it, something that wasn’t typically open to women in the 19th century. It also explores what it was like to be a woman at the time, to constantly be in the male gaze, to modify your behaviour to keep men happy, to do things that would not call your morality into question.

It’s one of those well-crafted, entertaining novels ideal for those times when you are simply looking for something quick and absorbing to read, but because it is also underpinned by important issues and rooted in historical fact, it’s got enough meat on the bones to make it chewy, too.

11 thoughts on “‘The Doll Factory’ by Elizabeth MacNeal”