When I repatriated to Australia in June 2019 (after almost 21 years living in the UK), one of the first things that struck me was the number of domestic violence incidents, most of them homicides, in the news. This came to a head in February last year with the shocking and distressing case of Hannah Clarke, who was burned to death in the family car with her three young children, after her estranged husband set fire to the vehicle.

But despite the vital national conversation that ensued about the ways in which women are abused (physically and psychologically) in the home, it’s still clear that the media views such cases as individual events rather than as a systemic problem (something highlighted by this recent study published in The Conversation) — and nothing has changed to make women safer.

More recently, the treatment of women in the workplace has also come to a head, with disturbing revelations about sexual misconduct, including rape, in Parliament House (see this Wiki article for a good summary).

Our own Prime Minister seems incapable of understanding the extent of the problem. He says he is listening to Australian women, but actions speak louder the words. (He refused to meet with organisers of last week’s rally outside Parliament citing “security reasons”, which is ironic, given that it is the lack of safe spaces that was the crux of the whole Women’s March 4 Justice in the first place.) This curated letters page in the Sydney Morning Herald, addressed to the PM, highlights how deeply entrenched this issue is in Australian society.

I mention all this because it is important context for Debra Oswald’s latest novel, The Family Doctor, which puts domestic violence firmly in the centre of its compelling, page-turning plot. In fact, the book’s confronting subject matter — in which a family GP decides to take the law into her own hands — couldn’t be more timely. I ate this book up in a couple of days and came away from it having gone through ALL THE EMOTIONS from laughter and sadness through to a slow-burning righteous fury.

A crime novel with a difference

At its most basic level, The Family Doctor is a crime novel that strides two fences: on one side, it looks at a series of domestic violence cases from the victim’s point of view; and on the other it looks at what happens when a normal law-abiding citizen, infuriated by the abuse she sees on a daily basis, decides to dole out her own form of justice. But it’s also a book about female friendship, romance, the importance of family and wider societal issues, including toxic masculinity, support services, policing and the court system.

When the story opens, Paula Kaczmarek, a suburban GP, has opened her home to Stacey, an old school friend, and her two young children who are on the run from an abusive, estranged husband. One day Paula returns home to find the trio have been murdered. As someone used to helping others, she finds it difficult to come to terms with the fact that she couldn’t protect one of her dearest friends when she needed it most. It is this sense of guilt and her slow-burning anger that propels Paula to do more to help other women she believes are being abused in the home.

Later, when patient Rochelle Ferguson brings her ill six-year-old boy into the surgery for treatment, Paula notices Rochelle’s suspicious bruises and her son’s heightened anxiety. Rochelle admits that she is scared of her husband and that he hurts her, but she can’t leave for fear that will escalate the violence and put her son in danger. So when the husband turns up at the surgery a few days later with an injured hand demanding to see a doctor, Paula ushers him into her consulting room and makes a spur-of-the-moment decision that could have career-ending repercussions.

I can’t say much more than that because I don’t wish to spoil the plot, but what follows is a heart-hammering ride that explores a host of thought-provoking ethical issues including whether it is ever justifiable to take the law into your own hands. Is it permissable, for instance, to be proactive in order to prevent a likely tragedy than simply reacting to the aftermath even if that means you have to do something illegal? Can you ever justify taking harmful action if such action will stop more people being harmed? Where do you draw the line between playing God and letting events unfold naturally?

Interleaved with Paula’s storyline is that of her friend, Anita, a seasoned court reporter, who has been working on a feature article about the failure of the justice system to protect women (and children) killed by men.

This issue is demonstrated very clearly in a trial she is asked to cover in which a super-confident, good looking 36-year-old man is accused of murdering his girlfriend. He is said to have pushed her off a motorway overpass into oncoming traffic when she was fleeing him, but he claims she was mentally unbalanced and had committed suicide. He pleads not guilty.

As part of her coverage of this disturbing case, Anita befriends Detective Rohan Mehta, who is part of the prosecuting team, and becomes unexpectedly romantically involved with him. This relationship serves as an important message in the book: not all men are bad; some even go out of their way to help women and try to make the world safer for everyone.

The strength of this book lies in the ways in which it highlights, from multiple viewpoints and situations, what happens when the system continually fails the people it should be helping. Oswald, who writes with insight and care, shows the patterns of behaviour, the coercion, the power and the fear that is wielded by malevolent men to control the women in their lives, and she looks at the heartbreaking impact on the victims and their families.

This is a gripping story, never showy or sentimental, but brutally honest on all accounts, whether in its depiction of male violence or the ways in which women are conditioned to care for others or become subservient. Her cast of characters are all-too real, if deeply flawed, and their reactions and behaviours entirely credible.

Powerful, heart-rending and topical, The Family Doctor is the kind of novel that stays with you long after the final page. It deserves a wide readership.

About the author¹:  Debra Oswald is a playwright, screenwriter and novelist. She is a two-time winner of the NSW Premier’s Literary Award and author of the novels Useful (2015) and The Whole Bright Year (2018). She was creator/head writer of the first five seasons of successful TV series Offspring. Her stage plays have been performed around the world and published by Currency Press. Her television credits include award-winning episodes of Police Rescue, Palace of Dreams, The Secret Life of Us, Sweet and Sour and Bananas in Pyjamas. Debra has written three Aussie Bites books for kids and six children’s novels. She has been a storyteller on stage at Story Club and will perform her one-woman show, Is There Something Wrong With That Lady?, in 2021.  (1. Source: Allen & Unwin website.)

Where to buy: Currently only available in Australia.

‘An Isolated Incident’ by Emily Maguire
A literary crime novel that explores the outfall of one young woman’s murder on her family and the local community in rural Australia. 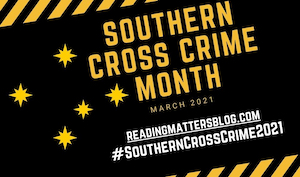 This is my 8th book for #SouthernCrossCrime2021 which I am hosting on this blog between 1st March and 31st March. To find out more, including how to take part and to record what you have read, please click here. It is also my 6th book for #AWW2021.

15 thoughts on “‘The Family Doctor’ by Debra Oswald”