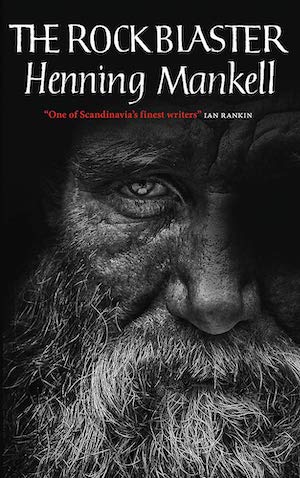 Before Swedish author Henning Mankell became a crime fiction superstar he penned this quietly devastating novel first published in 1973 but only recently translated into English.

The Rock Blaster tells the story of a young man, Oskar Johansson, who is seriously injured in an industrial accident blasting rock with dynamite to make way for a road. He’s not expected to survive — indeed, the local newspaper reports him dead — but he defies the odds, albeit losing an eye and a hand, and manages to return to work as an invalid after he has recuperated.

The novel charts Oskar’s life from the time of the accident, in 1911, to his death as an old man in 1969. A second thread, which is interleaved throughout, charts the sociological and political changes that occur during Oskar’s lifetime to build up a mesmerising portrait of one man and his place in history.

The story of Oskar is like an iceberg. What you see is only a small part. Most of it is hidden under the surface. That is where the bulk of the ice is, keeping its balance in the water and making its speed and course steady.

Oskar’s life story details his romance with a local girl before the accident to his marriage to that girl’s sister after the accident. Children are born. Jobs are held. Political parties are joined. Activism ensues. There are ups and downs, deprivations and small joys. Grief. Loss. Retirement. Solitude.

His experiences are presented as a series of flashbacks, interviews with an unnamed narrator and other fragments, and it is written in gentle, hypnotic prose, with nary a word wasted.

In early April in 1949, Oskar buys a propaganda poster¹. It is one of the most famous ones, the most widely disseminated and translated, but above all perhaps the most effective graphic analysis of the capitalist system ever published. It is the well-known pyramid, which was first printed in the USA in about 1910.

Fuelled by a sense of social justice and moral outrage, The Rock Blaster rails against capitalism and the ways in which the system uses the working classes to prop up the entire economic edifice of mid-20th century society.

Fight for a cause

I adored this novel. There’s something sublimely honourable about it. I loved the way it puts the working class centre stage and highlights how it is up to every single one of us to fight for what we believe in, to speak up against wrongs and to forge our own path in life. It tapped into my own sense of social justice and made me angry on Oskar’s behalf.

I’m so glad it finally got translated into English — even after all this time (47 years!) so much of this novel is relevant today.

1. You can view that poster on Wikipedia

6 thoughts on “‘The Rock Blaster’ by Henning Mankell”