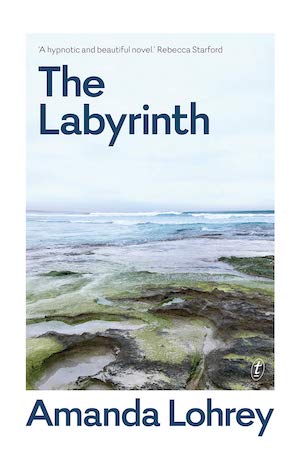 I have Lisa Hill from ANZLitLovers to thank for introducing me to this intriguing novel, which I won in a prize draw that Lisa ran on her blog last year. (You can read Lisa’s review here.)

Amanda Lohrey is a new-to-me Australian author, but she’s written many books and essays, been nominated for numerous awards and won a handful of prestigious ones, including the Patrick White Award in 2012.

The Labyrinth is her eighth novel, which has just been longlisted for this year’s Miles Franklin Literary Award (which I’ve neglected to even mention on this blog because I’ve been otherwise occupied).

Set on the coast, it’s a deeply contemplative tale starring all the topics I love reading about in novels — guilt, redemption, moral culpability, insanity, art and the complex, sometimes fraught relationships between parents and children — so any wonder I loved it.

The focus of the story is Erica Marsden, an older woman, who grew up in an asylum (her father was a psychiatrist). This is an important detail because it shows how she is attuned to madness in the world. Now, having quit her job, she has moved into an isolated, rather rundown shack by the beach. She’s cut herself off from family and friends so that she can spend time alone to mend a broken heart, to grieve for something she has lost.

But her grief is not the result of a romance gone wrong. Her son, Daniel, has been imprisoned for a brutal homicide he committed, and Erica, shocked to the core, refuses to give up on him even though his crime weighs heavy on her. Indeed, her new home is only a relatively short drive from the prison in which he’s incarcerated, which means she can visit him — whether he likes it or not. (Her visits, it has to be said, are painfully evoked, brimming with hurt and anger and incomprehension. I felt myself squirming in my seat as I read these scenes.)

In the long gaps between visiting hours, Erica focuses on two separate projects.

The first is to destroy Dan’s extensive book collection —  at his request — by burning individual tomes in a painstaking daily ritual that she ekes out for as long as possible. She even hires a local schoolgirl to help arrange the books in alphabetical order, a completely unnecessary task, but one that helps delay the books’ inevitable destruction.

The second is to build a labyrinth out of local stone, a work of art that she spends many hours planning, in the knowledge the act of building it will help her out of her current muddled frame of mind, not quite believing her son has carried out such a horrific crime. And when the labyrinth is complete she will be able to walk its one single path to the centre as a way to calm her mind.

First the making—I recalled my father’s words: the cure for many ills is to build something—and then the repetition, the going over and over so that time would rupture and be stopped in its flow. And I could live in an infinitely expanding present in which there was no nostalgia, no consequence, no outcome or false promise. The future meant nothing. Since my past and my future were hitched to my son’s life sentence, I felt that if I stepped outside the present I risked being turned to stone.

She can’t make the labyrinth alone, however, and after ruling out a local architect who lives nearby, she hires a homeless man, living in the sand dunes to help her.

Jurko, it turns out, is an illegal immigrant, who has abandoned his family on the other side of the world and has secrets of his own to keep. Erica’s relationship with him, which develops gently over time from client to friend to lodger, is one of the strengths of the novel, for it shows how her cool exterior begins to thaw as trust is gained and confidences exchanged.

The importance of friendship, it would appear, is one of the novel’s central themes, for Erica wants to be alone, but in a small tight-knit community on the coast, where everyone knows everyone else’s business, it’s difficult to remain reclusive without being seen as aloof or someone of whom to be suspicious. She slowly builds up relationships with neighbours and acquaintances, learning to let herself live again, learning to open her heart to the world.

The Labyrinth is a beautifully crafted novel. It’s a rare example of a story that is both disquieting and yet deeply satisfying. It’s intimate and honest and brims with all kinds of important questions about what it is to reckon with the past and navigate the future.

13 thoughts on “‘The Labyrinth’ by Amanda Lohrey”