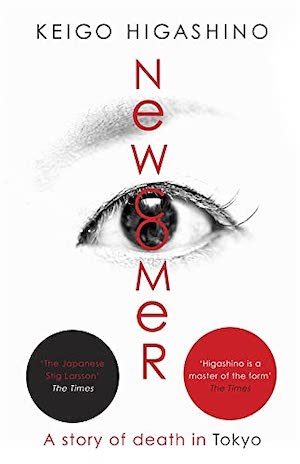 Keigo Higashino is a Japanese crime writer who likes to spin his tales in a completely different way to most crime writers. He basically takes the rules of the genre, rips them up and throws them away — and then does things completely on his own terms.

Whodunnit with an unusual structure

Newcomer, which is set in Tokyo, is a whodunnit but the narrative is structured in an unusual way: each phase of the police investigation into the homicide of a 40-something woman is told as if it’s a standalone short story. With each new story, or chapter, we learn something new about the case as the list of suspects grows longer and longer.

The investigation is led by Detective Kyochiro Kaga, a sharp-minded, highly experienced policeman who has just been transferred to the Tokyo Police Department and who was first introduced to readers in Higashino’s previous novel Malice. (Newcomer is billed as book 2 in the Kyochiro Kaga series but you don’t need to have read the first to enjoy this one.)

As his investigation into the murder of divorcee Mineko Mitsui proceeds, more and more potential suspects enter the fray to the point where you wonder whether he is ever going to be able to weed out the real culprit.

The evocative setting — the Nihonbashi area of Tokyo, which is dominated by family-run shops and all-night bars, and is, I believe, one of the original areas of the city — lends an olde-worlde charm to the tale as Kaga slowly but surely traces a series of items found in the dead woman’s home back to the shops in which they were purchased.

His logical and methodical inquiry eventually allows him to rule out several suspects, and the denouement comes in the form of a final chapter that reveals who did it, how they did it and why.

A bit of a plod

Regretfully, I didn’t find this book as exciting as previous Higashino novels I have read, and for the most part, I found it a little dull and plodding. I kept wondering how he was going to tie up all the loose ends, and by the time he did so, I’d become bored by the storyline. It definitely lacks tension.

But it’s an intriguing read in terms of characterisation, scene-setting and plotting. Higashino wields his pen carefully, giving us a rather charming, calm and sensible hero, who uses his brain and his wits to put all the clues together without fuss or agenda. In many ways, Kaga might be a little too nice to be a police detective!

Newcomer — the title refers to Kaga being the new man in the police department — is an unconventional mix of cosy crime and modern-day police procedural. It’s an unconventional mystery full of red herrings, subtle reveals and a suspect list so long the book comes with a dramatis personae right upfront. It might be for you if you’re a crime reader looking for something a little on the unusual side.

2 thoughts on “‘Newcomer’ by Keigo Higashino”